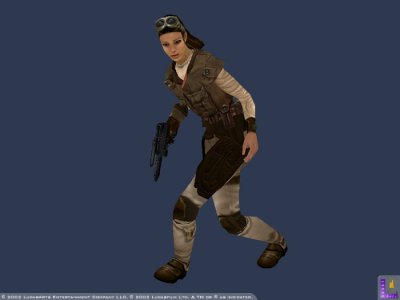 EQUIPMENT
CREDITS - 2,200
Heavy Blaster Pistol 5D, Blaster Rifle 5D (also uses a variety of weapons whenever necessary).
Personal Force Shield (Absorbs 15D of damage which is allocated as needed, however loses one pip every round it is active.)
"Moldy Crow" Transport Vessel, and later "The Ravens Claw" Transport Vessel.


Jan Ors A native of the planet Alderaan, Jan Ors served as an Alliance operative during the early years of the Galactic Civil War. Jan first met Kyle Katarn when he was still in training at the Imperial Military Academy. Katarn actually led an Imperial raid on a Rebel base where Jan was stationed, and although the Empire took control of the outpost, Kyle spared Jan's life during the operation. Later, aboard the luxury liner Star of Empire, Jan met Kyle again as he was on his way to his first military posting.


Page designed in Notepad, logo`s done on Personal Paint on the Amiga.
Text from LucasArts.com, Stats by FreddyB. Image is by LucasArts, copyright remains with them.
Any complaints, writs for copyright abuse, etc should be addressed to the Webmaster FreddyB.