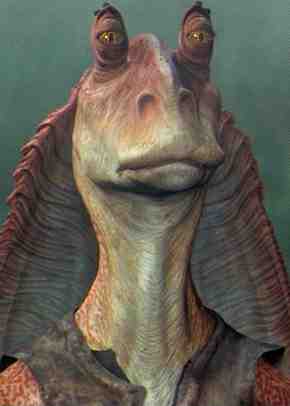 
Aquatic: Gungans are as at home in water as they are in air, capable of holding their breaths for extended periods while swimming, allowing them to remain submerged between breaths for many minutes. Although this does serve them some advantage in a vacuum, they have no resistance to the other deleterious effects that this environment has on their bodies.

Cartilaginous Body Structure: With very few bones, and most of their body supports made from flexible cartilage, Gungans are resistant to blunt trauma, resisting non-piercing physical damage with a bonus 2D. This offers no protection against projectile weapons, energy weapons or stabbing/slashing weapons such as knives or swords. However it does provide them with impressive resistance to concussion waves such as blast waves from grenades.
Character Bio -


An orphan, Jar Jar was not even 20 years old by the time he was exiled from Otoh Gunga. By that early age, he had done a lot ... of destruction, that is. Jar Jar's clumsiness resulted in unfortunate incidents with the city sewer system, the accidental freeing of animals in the Otoh Gunga Zoo, and the flooding of Boss Nass's mansion and adjoining bubbles while he was working as a waiter. His bumbling caused many a headache to city officials in Otoh Gunga, especially Captain Tarpals.

Long before galactic strife enveloped his native Naboo, Jar Jar Binks was exiled from the underwater city of Otoh Gunga. His main sin: being clumsy in front of the head of his clan. To hear Jar Jar tell it in his Gungan/Basic pidgin, he "boomed da gasser, and crashed de boss's heyblibber, den banished."

An outcast, the Gungan spent his time in the Naboo swampland, surviving on raw shellfish or just about anything else that the murky ecosystem had to offer. Jar Jar's fate took a twist when the hapless Gungan encountered a pair of Jedi as they eluded enemy forces during the Trade Federation invasion of Naboo.

By Gungan tradition, Jar Jar found himself indebted to Qui-Gon Jinn for saving his life. Jar Jar guided the Jedi to the underwater city of Otoh Gunga, where they secured transport to the Naboo capital of Theed. Jar Jar braved the "nocombackie law" to present Qui-Gon to the Gungan leader, Boss Nass, even though he risked the consequence of being "pounded" to death.

Throughout the adventure of liberating Naboo, Jar Jar tagged along with Qui-Gon. Although his bungling, haphazard mannerisms constantly landed him in hot water, his good nature and loyalty somehow helped him triumph in the end.

Queen Amidala requested that Jar Jar make contact with the Gungans. With Jar Jar's help, the Naboo and the Gungans forged an alliance that liberated the besieged world of Naboo. During the ground battle against the mechanized armies of the Trade Federation, Jar Jar was made a general in the Gungan Grand Army. After the battle, Jar Jar continued to ascend in Gungan society, putting his awkward past as an outcast behind him.

Jar Jar eventually became a Senior Representative for Naboo, serving alongside Padmť Amidala in the Galactic Senate. While his compassion spoke volumes of the quality of his character, his inherent gullibility and trusting nature were easily exploited by the less scrupulous in the field of politics. For many, Jar Jar was but a joke, the subject of derision, but in the corrupt inner confines of Senate, his lanky frame stood as a rare example of non-corrupt politician interested only in the greater good of the Republic and his people.

Jar Jar was a member of the Loyalist Committee, a panel of Senators concerned with countering the increasing threat of a Separatist movement spreading throughout the galaxy. He and Padmť worked hard, favoring negotiation and peaceful resolution over the growing popularity of the Military Creation Act. While Padmť was away from Coruscant, it was Jar Jar who took her place in the Senate.

After several botched assassination attempts on Senator Amidala forced her to flee the capital, Jar Jar again served in her stead. The Gungan politician was there, in Palpatine's office, when it became apparent that desperate measures would be required to stop a Separatist force determined to start a war with the Republic.

Jar Jar took the initiative and proposed the motion granting emergency powers to Supreme Chancellor Palpatine -- a move that would have profound impact on the Galactic Republic.