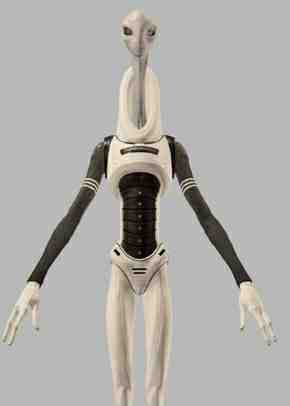 
While only a select few know of the Kaminoans, they are recognized by those in the know as as the preeminent cloners in the galaxy. The gentle and seemingly naive Kaminoans possess a scientific cunning that allows them to excel in the genetic manipulation of numerous species. They have, in the past, completed orders of questionable ethics, creating armed forces. They take pride in their work, never appearing to think of the consequences of their craftsmanship.

The largest and best-known example of their clone armies is the one they crafted specifically for the Republic. Fulfilling an order apparently commissioned by Jedi Master Sifo-Dyas, the Kaminoans used a bounty hunter named Jango Fett as the template for their human army. The end result was a military force of alarming skill, speed and efficiency.

Kaminoans are tall, slender beings with glassy eyes, elongated necks, and pale skin. The males of their species often have prominent head-fins, a throwback to their evolutionary roots found in the oceans of Kamino. The Kaminoans inhabit the stilt cities of their planet, with the largest concentration residing in Tipoca City.

When the planet Kamino began to come out from the deep freeze of an ice age, and its oceans swelled with melting ice, the native inhabitants were forced to adapt. Pushed to the brink of survival, the Kaminoans perfected cloning technology and practiced selective breeding to keep their species viable.

The struggle for survival instilled in the Kaminoans an austerity that rejects materialism common in other cultures. A stroll through a Kaminoan city reveals a stark minimalism of seemingly colorless walls and structures. Beings capable of seeing the ultraviolet spectrum, however, will note that the Kaminoans do indeed have a decorative sense.

Kamino was in need of raw materials, so the Kaminoans traded their genetic sciences expertise in return for necessary imports. Though few know of their world, those that do laud the Kaminoans for their cloning skills. The mining colonies on Subterrel employed Kamino-made cloned workers and they have in the past crafted clone armed forces.

Though outwardly polite, the Kaminoans foster an intolerance of imperfection. They see such flaws as potential poisons to an ideal gene pool. They closely monitor their cloning projects for any deviations in biochemistry, subjecting wayward clones to extensive conditioning to pull them back in line.

Kaminoans have very little interest in life beyond their solar system, other than the imports needed by their society. They are detached from the arena of galactic events and have no concerns regarding the repercussions of their breakthroughs.


Ultraviolet Vision: Kaminoans can see into the Ultraviolet spectrum, giving them an enhanced range of vision in conditions that other species would consider too dark to see clearly. This means that Kaminoans gain no penalties from Low Light conditions, although Pitch Black conditions effect them normally.


Rare: Kaminoans rarely leave their home system, meaning that other species have little idea of their language, culture or medical needs, something which causes the few Kaminoans who do venture out into the galaxy some occasional problems.

Intolerance: Kaminoans dislike imperfection, this means that they try to correct this imperfection whenever they can, for example with their clones. However it also means that they are somewhat intolerant of those they see as imperfect, and may look down and treat with distain those that they find lacking. Groups which Kaminoans often find distasteful are those such as the homeless, those with long term illnesses, cripples, and the very poor.