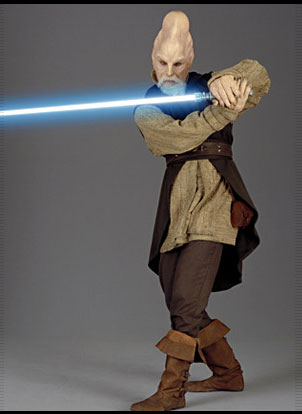 SPECIAL ABILITIES
Binary Brain:
Cereans have a binary brain which provides them with thought processes that operate far faster than other species. While this does not make them any more intelligent than other species, it does allow them to think slightly faster giving them a +1D to initiative rolls.


As a four-year-old, Ki's raw talents in the Force were discovered by the mysterious Jedi Master known only as the Dark Woman. Ki's family, realizing that the galaxy needed protectors to save the innocent from such threats as Cerea's own unscrupulous raider Bin-Garda-Zon, allowed Ki to be taken to Coruscant to undergo Jedi training.

Upon entering the larger world of the Jedi, the Council assigned Ki-Adi-Mundi to Jedi Master Yoda. Decades later, Ki-Adi-Mundi returned to Cerea to help rid the world of the marauding raiders. Ki became watchman for the Cerean system, observing his peaceful world undergo the growing pains of joining an increasingly advanced and hectic Republic.

Despite adherence to the Jedi philosophies, Ki was, in his hearts, a Cerean. He followed the Cerean custom of polygamous marriage, taking a bond wife, Shea, and four honor wives. He fathered seven daughters and became a strong community leader. Ki was granted this exception because of the low Cerean birthrate. He tried to remain unattached, but it was difficult. He felt this attachment all too deeply when his family was killed during the Clone Wars.

Ki-Adi-Mundi's ascension to the rank of Jedi Master was still in progress when the Naboo crisis arose. Also around that time Ki was embroiled in a political struggle as proponents of progress sought to change Cerea's serene ways. Ki's own daughter, Sylvn, joined the radicals, placing her life in danger as she became kidnapped by the criminal gun- runner Ephant Mon. Ki tracked Mon to Tatooine, discovered the duplicitous involvement of the Trade Federation, and rescued his daughter.

Following his exploits on Tatooine, Ki-Adi-Mundi was invited to permanently join the Jedi Council, filling a space left vacant by the recently deceased Master Micah Giiett. It was at this time that he was officially granted the rank of Master.

Ki-Adi-Mundi returned to Tatooine, searching for the missing Jedi Master Sharad Hett. After adventuring in the deadly desert sands, Ki-Adi-Mundi found Hett and his son A'Sharad, who had been living with the native Tusken Raiders. Hett was killed by the Jedi hunter Aurra Sing, and Ki-Adi-Mundi took A'Sharad as his Padawan, continuing the young Jedi's training.

At the outbreak of the Clone Wars, Ki-Adi-Mundi commanded clone trooper forces on Lianna and Hypori. The latter proved to be almost fatal, as his group of Jedi Knights were almost wiped out by the evil General Grievous. If not for the timely arrival of an elite squad of ARC troopers, Ki's legacy would surely have ended there

About a year later, Ki-Adi-Mundi and Bultar Swan led forces on Aargonar. The situation was dire. With field commander A'Sharad Hett having been shot down in battle, it fell to Ki to decide whether to surrender or press forward. Not wanting to face another loss like the one on Jabiim, Ki persevered. He and his troops waited out a blinding ion-charged sandstorm at Vondar Canyon before setting out on the offensive.

With the help of Anakin Skywalker, Ki-Adi-Mundi's forces were able to turn the tide. At this point in the Clone Wars, Obi-Wan Kenobi was presumed killed. The Jedi Council temporarily reassigned Anakin to Ki-Adi-Mundi. The two returned to Coruscant, where Ki-Adi-Mundi addressed the Senate, updating the ruling body on the progress of the war. The two were assigned to deal with increasing pirate activity in the Varonat system. There, Anakin felt through the Force that Obi-Wan was still alive. Disregarding Ki-Adi-Mundi's instructions to turn back, Anakin left for Riflor, where he was reunited with Kenobi.

Having had his fill of the headstrong reckless Padawan, Ki-Adi-Mundi easily returned responsibility for training and guiding Anakin to Obi-Wan.

Ki-Adi-Mundi was an alien representative who sat on the Jedi Council. A humanoid being, Ki's most distinguishing physical feature was an enlarged conical cranium that contained a binary brain.

When Jedi Master Qui-Gon Jinn reported a Sith attack during the events surrounding the Battle of Naboo, Ki-Adi-Mundi expressed shock at the notion. "Impossible," he remarked, "the Sith have been extinct for a millennium."

For its failure to detect the Sith menace in time, the Jedi first suffered the loss of one its greatest Masters, Qui-Gon. Ki-Adi- Mundi voyaged to Naboo to attend Jinn's somber funeral, and was also present at the jubilant celebration that marked the liberation of Naboo.

A decade later, Jedi Master Ki-Adi-Mundi continued to serve on the Council. He was present during one of the gravest crises ever to face the Jedi order: the Separatist movement that threatened to split the Republic. Like most in the order, Ki-Adi- Mundi refused to believe that the movement's architect, former Jedi Count Dooku, was behind its more violent actions. As a political idealist trained in Jedi philosophies, such acts would be beneath Dooku, Ki-Adi-Mundi reasoned.

Ki-Adi-Mundi was not the only Jedi to be mistaken about Dooku's limits. The former Jedi oversaw the scheduled execution of Obi-Wan Kenobi, Anakin Skywalker and Senator Padmé Amidala. The sudden arrival of a Jedi taskforce -- including Ki-Adi-Mundi -- rescued the three captives. Ki-Adi- Mundi and several of his fellow Jedi Council members did battle with Geonosian and Separatist droid forces. While the Jedi were prepared to handle the Geonosians, they were surprised by the immensity of the Separatist droid army. Many Jedi died that day, though Ki-Adi-Mundi was one of the survivors.

When Republic reinforcements arrived, Ki-Adi-Mundi hopped aboard a Republic gunship, and later led units of clone troopers into the thick of combat. The war-scorched flats of Geonosis became the first battleground of the devastating Clone Wars.

Like his fellow Jedi, Ki-Adi-Mundi became a general in the Clone Wars, leading clone trooper infantry on campaigns scattered throughout the galaxy. He still retained his high position on the Jedi Council, remotely attending council sessions via hologram.

During the Outer Rim Sieges, as the Clone Wars were nearing their end, Ki-Adi-Mundi was stationed on the Banking Clan stronghold world of Mygeeto. There, he led the Galactic Marine clone troopers with Commander Bacara.

He stayed in touch with Coruscant as the Jedi Council was experiencing the changes initiated by Chancellor Palpatine. He grew wary of the Chancellor and his bids for increased executive power. When the upper tier of the Jedi Council -- himself, Yoda and Mace Windu -- discussed a possible course of action to remove the Chancellor, Ki-Adi-Mundi advised that the Jedi order would have to take control of the Senate in the interim, to ensure a secure transition of power. Taken out of context, such discourse would be branded treason -- it was a disturbing sign at just how unstable the democracy of the Republic had become.

The transition never happened due to the machinations of the Chancellor. Palpatine initiated Order 66, the ultimate endgame contingency against the Jedi. The order, transmitted secretly to the clone commanders spread across the galaxy, identified the Jedi as traitors to the Republic. Commander Bacara and his marines opened fire on Ki-Adi-Mundi. Though the Jedi attempted to put up a defense, he was overwhelmed by the gunfire and killed.