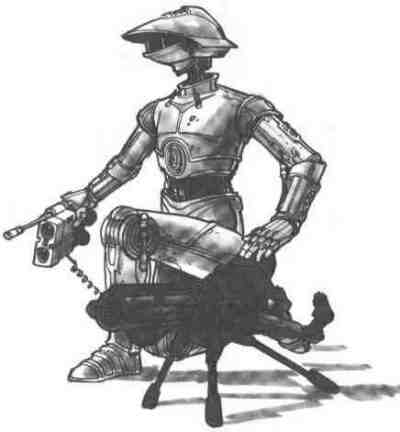 Description: The Military Protocol Droid is a modified version of the 3PO Human-Cyborg Relations Droid, and is designed to both act as a translator droid, and also to provide support in a not combat role handling paperwork, ordering and tactical support for the soldiers it is assigned to. These droids are also capable of limited combat roles, although are not usually assigned to this role since the combat matrices occasionally conflict with the 3PO programming still latent in the droid. Although only officially sold to the Military, these droids are a highly wanted resource for mercenaries and pirates. M3PO's are less emotional that their 3PO droid cousins, but the design of these droids is somewhat flawed with the droids containing many 3PO parts and programming, which is not suited to the role that the droid is intended for, meaning that these droids quickly pick up twitches and require memory wipes on a regular basis to stay at their best operation level.