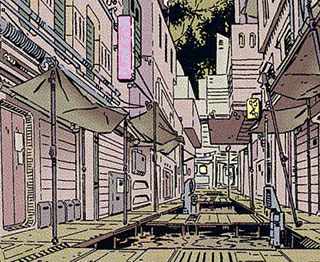 
Mimban is the fifth planet in the Circarpous system, in the Expansion Region. It is a cloud-covered jungle world that is largely unexplored, orbited by two moons. The planet, formally known as Circarpous V, was never colonized by the Cicarpousians, but it was the site of a Imperial energy mining operation. As such, the atmosphere over Mimban was very turbulent. Starships without special hulls faced tremendous danger from the energy storms that streaked the stratosphere. The surface of the planet is dank, and the perpetual mist makes it difficult to distinguish night from day. The planet has five makeshift mining towns, all run by Imperials during the height of the operation.

Mimban has numerous intelligent species indigenous to the world, including the "Greenies" and the Coway. The first is a species of green-furred Mimbanite humanoids who have been exploited by the human population. The latter is a gray-furred species of troglodytes who are powerful warriors. Mimban had many other species as well who have since become extinct. One of these, the Thrella, built enormous temples and structures honoring their many gods.

Luke Skywalker and Princess Leia Organa crashlanded on this planet when en route to a diplomatic meeting on Circarpous IV. The two faced many natural dangers in the Mimban swamps, and also confronted Darth Vader in a quest to find the legendary Kaiburr Crystal.