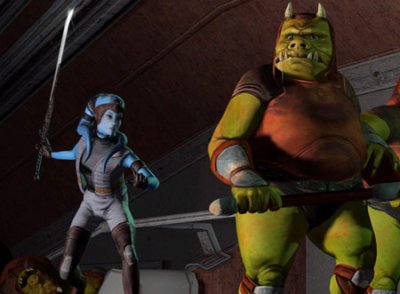 
Surviving in the Lower City of Taris was no easy task, particularly for a young Twi'lek girl on her own. But Mission Vao not only survived in the hard world of the swoop gangs, she throve. Four thousand years ago, the street smart Rutian Twi'lek became an authority on the hidden alleys, backstreets and secret entrances in the Lower City, and she was even known to explore the creature-infested sewers of the Undercity itself.

She wasn't always a street urchin. Mission Vao grew up with only her brother Griff as family, but that unscrupulous scoundrel abandoned her at a young age. Mission long blamed Lena, Griff's girlfriend, for luring him offworld and abandoning her. In truth, Griff was a freeloading leech that squandered Lena's credits in ill-considered get-rich-quick schemes. Lena finally left him, and Griff ended up on Tatooine, working for the Czerka Corporation.

On the Sith-controlled world of Taris, non-humans were frowned upon by the all-human cultural elite, and were driven into the lower levels of the city. There, Mission survived, though she made a number of enemies. Some, particularly the Black Vulkar swoop gang, sought to bring Mission's adventures to a permanent end. But despite the dangerous situations she constantly found herself in, this spirited young Twi'lek always managed to find a way out, and often with an incongruously sunny disposition. When her quick reflexes, quick thinking and even quicker mouth couldn't save her, she always had one last card to play -- her towering Wookiee companion, Zaalbar, whom she affectionately calls Big Z.

The odd pair were inseparable ever since Zaalbar arrived on Taris, and despite the obvious contrasts between them, their friendship benefited them both. Zaalbar knew he could rely on Mission to come up with a plan to make sure they had food in their bellies and a safe place to stay. And Mission knew that whatever trouble her schemes might get them into, Big Z would always be there to watch her back.

Just prior to Taris' destruction, Zaalbar fell afoul of a gang of Gamorrean raiders, and was held captive in the deep sewers of the Undercity. Desperate, Mission turned to resourceful escapees from a destroyed Republic cruiser to help her liberate her Wookiee friend. Proving to be an exceptional ally, Mission and Big Z accompanied the Republic heroes -- among them Bastila Shan and Carth Onasi -- in their quest to thwart Darth Malak's plan for galactic domination.