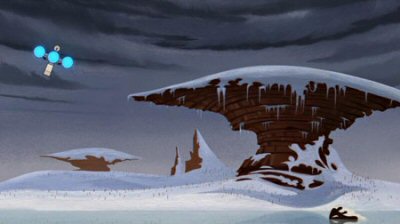 
A planet in the Koobi star system, Nelvaan is a primitive world of low gravity experiencing the onset of an ice age. Three moons orbit Nelvaan, a scarcely charted world of the Outer Rim that lacked planetary government and held no allegiance in the Clone Wars. Its simple inhabitants have largely avoided off- world contact, even though Bothan water freighters occasionally fill their holds with the pure glacial run-off from this planet. These crafty traders sell their tanks of water in local space with promises of invigorating, life-bolstering minerals which have never been scientifically scrutinized.

To the Nelvaanians, such trade is largely inconsequential, as these harvesting operations happen far from their isolated villages. A secondary and somewhat inadvertent export of the planet was a pidgin variant of the local language acquired by the first Bothan scouts, who went on to incorporate Nelvaanese phrases into trade dialects that can be found in surrounding space.

Nelvaan's low gravity has fostered the growth of some truly massive life forms, like the voracious horax that thunders through the forests. It has also produced odd landscapes of precarious mesas that would have toppled centuries ago in worlds with standard gravities. In the shadows of such mesas live the Nelvaanians -- canine-muzzled humanoids that live a primitive, tribal existence.

During the Clone Wars, the Techno Union had a top secret operation on Nelvaan. Tapping into the planet's geothermal energies, they powered a subterranean laboratory dedicated to cyborg warrior development. Unhappy with the technological progress of battle droid armies, and inspired by the success of General Grievous' cybernetic form, a secret group of Techno Union specialists began capturing native Nelvaanians and subjecting them to experimental mutation programs in search of the perfect cyborged super soldier.

The laboratory used a geothermal crystal at the heart of a massive siphon generator that drained the surrounding area of thermal energies. The result was an endless winter along the Rokrul villages. Many of the village's greatest warrior scouts went to investigate the strange noises and activities, only to vanish. Even Rokrul's wise shaman, Orvos, could provide no answers. But the ancient seer had a vision of strangers that would enter their land, and learn what ailed the Mother -- the Nelvaanian term for their world.

Obi-Wan Kenobi and Anakin Skywalker arrived on Nelvaan at the end of the Clone Wars, following intelligence reports that General Grievous had been spotted in the area. They entered the Rokrul village and learned of the problems faced by the Nelvaanians. Anakin Skywalker followed the frozen river to the heart of the geothermal disturbance -- a cavern that cut deep into Nelvaan's surface. There, he experienced a prophetic vision of impending darkness, and also discovered the secret Techno Union laboratory.