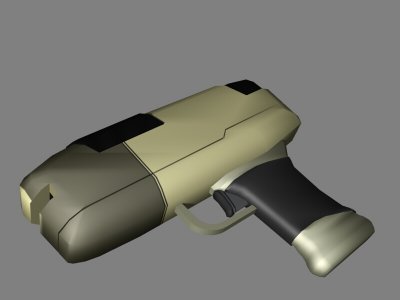 
Description: Although manufactured by former Rebel Alliance armament factories directly for the New Republic this weapon was designed and developed by BlasTech for the fledgling government. Produced as the first weapon produced by New Republic Arms, mainly for use by New Republic personel, the weapon was also sold in limited numbers on the open market although New Republic Arms could not compete with the giants of weapon manufacturing, SoroSuub and BlasTech. The "FireStarter" Blaster Pistol is a well designed weapon, with no rough surfaces which would hinder fast draws, and although its range is disappointing it manages to provide similar levels of damage to a Heavy Blaster Pistol while also providing a superior Ammunition supply to most other Blaster Pistols. These weapons were intended to become the symbol of New Republic forces and law enforcement agencies, providing a standardised look across the whole of the new government, however the vast quantities required for such a task were almost astronomical, and demand always outweighed supply. These weapons are still the main product of New Republic Arms, and look likely to continue production for a long time to come.