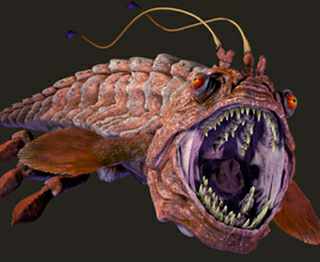 Special Abilities
Teeth: Str+2D Damage.
Massive Size: Opee Sea Killers are huge creatures, their size alone makes them resistant to small weapons giving them a bonus 2D to resist damage.
Sticky Tongue: Opee Sea Killers have a long sticky tongue which can fire out of their mouth to capture prey, this gives them a bonus 1D to hit prey with their tongue, and a bonus 2D to their Strength to restrain their prey.
Speed Boost: Opee Sea Killers have a remarkable system of vents in their bodies which allow them to perform bursts of speed to capture their prey, this system boosts their swimming speed from 14 to 20 when in use.

Description: A creature lurking in the abyss of Naboo, the opee sea killer is an amalgam of evolutionary traits found in other animals. It has armor and limbs like a crustacean, but has the massive hinged jaws of other fishes. The opee is a silent hunter, typically lying in wait, clinging motionless to rocky crags. When it spots a tasty morsel, the creature captures its quarry with a long sticky tongue that drags struggling prey into a mouth filled with double rows of teeth.

The opee sea killer swims via a remarkable example of organic jet propulsion. The opee draws in water through its mouth, and forces it through openings beneath its armored plates, giving it impressive speed over short distances. The three pairs of armored legs assist in this pumping motion, as do a pair of pectoral guidance fins.

The long antenna-like stalks growing from the opee sea killer's head are actually lures that the beast uses to attract prey.

Opees are mouth breeders -- the male opee carries and protects fertilized eggs in his mouth. He fasts for three months as the eggs mature, which then hatch producing hungry young killers. There are reports of the opee's deep sea rival, the colo claw fish, inadvertently swallowing young hatchlings whole, only to be killed when the hungry youngsters chew their way out of their captor's stomach.