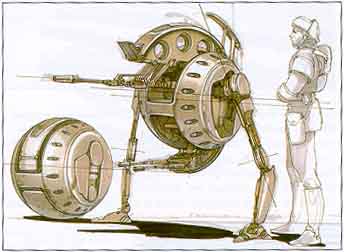 Description: This prototype design for the Droideka was a reasonably powerful combat droid, with a high deployment speed, powerful weaponry and its own shield generator. However the poor visual sensor, and inaccurate targetting logic made this prototype design a poor fighter on the battlefield, and led to the abandonment of the design in favour of others. However this was after a large number had already been constructed, most of which were stripped down for parts, but a few remained in storage and later were sold onto the black market after the fall of the Trade Federation during the Clone Wars. These have now ended up in the hands of various criminal organisations, who value these powerful combat machines for their intimidation effect and large guns.