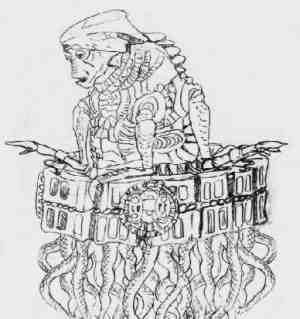 Although the true name for this species is unknown, they are most commonly seen when bonded with the techno-organic vessels known as Leviathans. Their lower bodies are entirely constructed from long tentacles of nerve fibres, which when bonded with a Leviathan grow many hundreds of feet long, merging with the nerve system of the Leviathan. However an unbonded Pilot can use them to drag themselves around, but more usually they use repulsorlift enabled belts which give them a greater degree of mobility, allowing them to interact with other species on a more equal footing. Pilots will usually give up their name upon bonding with a Leviathan, becoming simply the Pilot of ??????. Pilots not bonded with Leviathans still make remarkable spaceship pilots because of their spacial awareness, and most will leave their homeworld during their life because of the lure the stars have for this peaceful species once they have matured and reproduced. The compatibility between Pilots and Leviathans is remarkable, and leads some researchers to wonder if they have been both genetically engineered to operate together.

Navigation: Pilots have a natural affinity with piloting and space, getting a bonus dice on all spaceship operation rolls (Sensors, Space Transports, etc) and astrogation, however if they are bonded with a Leviathan this bonus is doubled to 2D.

Regeneration: Pilots have a high natural healing factor, allowing them to regrow severed limbs or nerve tentacles, this is a slow healing and may take several months to complete. This feature is also what allows Pilots to grow their nerve tentacles into the nerve systems of a Leviathan.

Nerve Bonding with Leviathans: As mentioned many times above, Pilots have the unusual ability to be bonded with a Leviathan Techno-Organic spaceship, this allows them to control the sentient ships with a thought, however usually is more of a partnership, as the Leviathan provides the Pilot with sustainance and sensory input, which means a particularly poorly treated Leviathan could kill its pilot should it so wish. This nerve bonding is a permanent affair, killing the Pilot should them ever be forcibly removed, and killing the Leviathan unless a replacement Pilot is grafted into place quickly. The benefits of this bonding are described above under the Pilots natural navigation abilities, but this symbiotic relationship seems to go so much further than a simple pilot / starship one as the two creatures are almost bound into one.

Page designed in Notepad, logo`s done on Personal Paint on the Amiga.
Text completely by FreddyB. Image is concept work from the series Farscape, copyright resides with the programmes makers.
Any complaints, writs for copyright abuse, etc should be addressed to the Webmaster FreddyB.