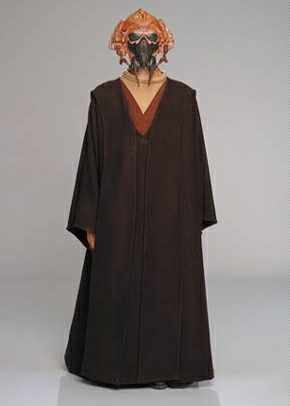 SPECIAL ABILITIES
Gas Breather: Kel Dor are methane breathers and require their native atmosphere to survive. Without protective goggles outside their homeworld, a Kel Dor is considered blind. Without a breath mask, a Kel Dor begins to suffocate.

Low-Light Vision: Kel Dor can see twice as far as a Human in dim light (such as moonlight) when not in their native atmosphere. They retain the ability to distinguish color and detail under these conditions.

These are the known powers Plo Koon possessed and it is believed that he had access to other powers.


In the waning days of the Republic, the ranks of the Jedi Order were commanded by a High Council of Jedi Masters who convened in a towering temple on Coruscant. Twelve Jedi sat in a circle to contemplate matters of the Force, and dispatch Knights to scattered crises across the galaxy.

One such Jedi Master was Plo Koon, an imposing alien whose face was concealed behind a forked facemask. His well-muscled humanoid form filled out the traditional Jedi robes. Koon was present on the Council when Jedi Master Qui-Gon Jinn presented Anakin Skywalker as a prospective Jedi candidate. He also served the Council a decade later when the Jedi faced one of their greatest conflicts: the Clone Wars. Plo Koon was present at the first battle site of the Clone Wars, fighting against Geonosians and battle droid forces in the cauldron of the Geonosian execution arena. Koon served valiantly as a general in the war on many battlefronts in the years that followed.

During the Outer Rim Sieges, Plo Koon was stationed on Cato Neimoidia, flying scouting missions over the bridge cities of the conquered world. It was then that Order 66 was enacted, branding every Jedi in the galaxy as an enemy of the Republic.

Plo Koon's clone wingmen carried out the order, communicated to them directly from Chancellor Palpatine. Aboard ARC-170 starfighters, the clone commander pilot opened fire. Plo Koon's starfighter spun out of control and crashed into the Neimoidian city below.