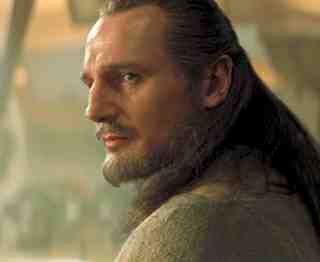 
A venerable if maverick Jedi Master, Qui-Gon Jinn is a student of the living Force. Unlike other Jedi Masters, who often lose themself in the meditation of the unifying Force, Qui-Gon Jinn lived for the moment, espousing a philosophy of "feel, don't think -- use your instincts." Were it not for Qui-Gon's unruly views, he would have undoubtedly been on the Jedi Council.

At the behest of Supreme Chancellor Valorum, Qui-Gon and his Padawan apprentice Obi-Wan Kenobi journeyed to Naboo to settle the trade dispute that threatened the peaceful world. Aboard a Trade Federation battleship, the Jedi were ambushed, but they managed to escape to Naboo's surface.

In the swamplands of Naboo, Qui-Gon rescued a clumsy Gungan outcast, Jar Jar Binks, who swore a life-debt to the Jedi. Qui-Gon's compassionate nature was such that he took the strange alien under his protection. With his help, they journeyed to the city of Theed. There, they freed Queen Amidala and her retinue from the clutches of the Trade Federation, and set off to deliver her safely to Coruscant.

During the trip to the capital, damaged sustained to the Royal Starship forced an unscheduled stop on the Outer Rim world of Tatooine. There, Qui-Gon discovered a young slave boy named Anakin Skywalker, who was strong in the Force. Sensing the boy's potential, Qui-Gon liberated Anakin from slavery. During their departure from Tatooine, Qui-Gon was nearly killed by a dark warrior, whom he suspected to be a Sith Lord.

The Jedi Master then traveled to Coruscant to present Anakin to the Jedi Council. The Council, however, felt Anakin's future seemed clouded and uncertain, and deemed the boy too old to begin training and dangerously full of fear and anger. They refused to allow Qui-Gon to train Anakin, but the Jedi Master nevertheless kept the boy as his ward as he returned to Naboo.

On Naboo, Qui-Gon and Obi-Wan confronted the Sith Lord Darth Maul, Qui-Gon's attacker from the desert. Maul proved a deadly and fearsome opponent. Together, Obi-Wan and Qui-Gon fended off the Sith Lord's attacks, but as the battle progressed, Master and apprentice became separated. Maul pressed his advantage, wearing down Qui-Gon's defenses and ultimately killing the Jedi Master. Obi-Wan then defeated Maul, but nothing could save Qui-Gon. With his last breath, the Jedi Master asked Obi-Wan to train Anakin, a request Kenobi accepted.

Qui-Gon Jinn was long hesitant to take on a Padawan learner, given his failure with his second student. Xanatos was the son of Crion, the wealthiest man on the planet Telos. He had a very high midi-chlorian count in his bloodstream, prompting Jinn to take him as an apprentice. Crion reluctantly agreed to let his son leave for Jedi training.

Although Xanatos' talents were undeniable, his high birth and attitude often led to clashes with his fellow students. For Xanatos' final test, Jedi Master Yoda sent him and Qui-Gon back to Telos, where a civil war was brewing. Xanatos' father implored his son to join his forces in a bid to control the planet. Xanatos agreed and Qui-Gon found himself at war with his own student. Jinn was forced to kill Crion in battle, and an enraged Xanatos battled his mentor. Though Qui-Gon defeated Xanatos, he could not bear to kill his own Padawan. The defeated student fled and Qui-Gon obsessed over his failure for years, dismissing his earlier successes as a teacher and often referring to Xanatos as his "first" apprentice.

Although he vowed to never again train a Padawan, Qui-Gon eventually formed a connection with an adolescent Obi-Wan Kenobi on a mission to Bandomeer. Yoda wished for Obi-Wan to become Qui-Gon's third apprentice. Eventually, Qui-Gon was able to overcome his grief, and took Kenobi as his Padawan. The path was by no means smooth, as their relationship suffered when Obi-Wan briefly abandoned the Jedi Order to help end a civil war on Melida/Daan. Eventually, and uneasily, the two reunited. They would grow to become a formidable team.