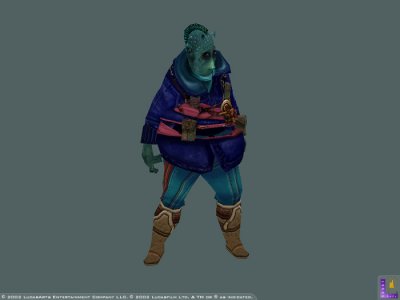 
Reelo Baruk is an obese Rodian known for the powerful crime syndicate he controls on Nar Shaddaa. Most people, however, just see Reelo as the legit owner of a garbage hauling company, since he goes to such great lengths to keep his criminal activity under the radar. Reelo's gang is made up of a mix of aliens found throughout the galaxy, some of the worst scum in the known regions.


Page designed in Notepad, logo`s done on Personal Paint on the Amiga.
Text from LucasArts.com, Stats by FreddyB. Image is by LucasArts, copyright remains with them.
Any complaints, writs for copyright abuse, etc should be addressed to the Webmaster FreddyB.