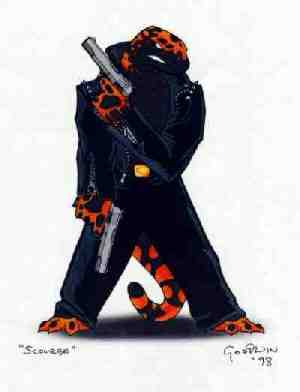 
The Scannat are a reptilian species whose skin colours although always accented by black range through strong colours such as red, blue and green, as well as combinations such as purple, yellow and pink. Although somewhat bestial in appearance they have a long history and culture and have been part of the galactic community for a century or so.Their society puts a strong emphasis on hunting, but unlike other species like the Rodians, the Scannat do not take this into their role in galactic society and very few Scannat individuals become bounty hunters or enjoy hunting sentient species.

Scannat enjoy hunting for sport, however will not waste what they catch, always cooking and eating their prey, this bias is perhaps why they dislike hunting sentients so much. Energy weapons are banned on their homeworld, which is not a disadvantage for the species since they find the ionisation smell from a fired energy weapon to be disgusting, leading to their species using projectile weapons for peacekeeping and hunting. As well as hunting, Scannat have a rich culture which the average individual enjoys immersing themself in, with literature, music and acting all important to the Scannat.


Tracking: Scannat are innate hunters with a powerful sense of smell, which gains them a bonus 2D when tracking by smell.

Smell: Part of the Scannat language is based on smell as well as sound, this means that the language is very hard for non-Scannat to speak, even translator droids. Another side effect of this is that non-Scannat find the smells they omit to be noticable and unpleasant, which reduces the Scannat's ability to interact on a social level.

Page designed in Notepad, logo`s done on Personal Paint on the Amiga.
Text completely by FreddyB. Image is by Goodwin, copyright resides with the artist.
Any complaints, writs for copyright abuse, etc should be addressed to the Webmaster FreddyB.