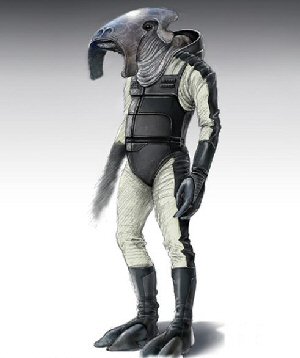 
The Selkath are an aquatic species from the planet Manaan which consists of a single giant ocean, although the Selkath can survive above the surface as well. They have built a single large floating city, Alto City, on the surface of the ocean, originally designed as a trading port for the export of Kolto, and one of the few places Sith and Republic forces came into contact peacefully, both too scared to breach the ceasefire forced upon them by the Selkath in case they lost rights to Kolto distribution. Kolto was a healing medicine far more powerful than Bacta, but available only in the oceans of Manaan, however it disappeared almost 4000 years before the rise of the Galactic Empire due to a Republic research project on Manaan. This led the Selkath to retreat from the galactic community and return to the oceans, although some rare visitors still encountered the Selkath in the remains of Alto City. The Empire siezed Manaan and positioned two Star Destroyers in the system, an unprecedented move for a low tech world and in all probability due to an ongoing search for Kolto. Alto City was reopened to the galaxy as a tourist destination, however it wasn't much more than a ruin after thousands of years of neglect. The Selkath have now returned to the galactic community after the Republic liberated their planet, although many of their species remain untrusting of other species.

Aquatic: Selkath can breath water or air with equal ease, living equally well underwater or on land, gaining a bonus 2D to their swim skill at character creation and not needing breahting aparatus underwater.

Conquered: The Selkath were subjugated under Imperial rule and forced to live above water, since many of their worlds problems were caused by off worlders and humans especially, many Selkath dislike and distrust humans and other aliens.

Page designed in Notepad, logo`s done on Personal Paint on the Amiga.
Text completely by FreddyB. Image is from Knights of the Old Republic, copyright resides with LucasArts / Bioware.
Any complaints, writs for copyright abuse, etc should be addressed to the Webmaster FreddyB.