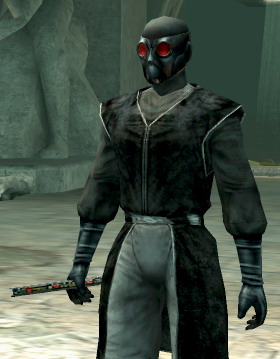 
The Sith Assassins were special forces used by the Sith during and after the Jedi Civil War, whose main task was exterminating Jedi. Despite not being Force-sensitive, they were quite efficient in their mission.

To achieve their goals, the Sith Assassins utilized a number of techniques, including:
usage of melee weapons, such as pikes, instead of blasters, which were easily deflectable by lightsabers;
stealth field generators, making them almost invisible to their targets;
wounding the Padawan first, in case an Assassin plans to eliminate two Jedi at once. The intent is to weaken the Master as the Padawan's pain is transmitted through their Force bond.


The Assassins were also trained to resist Jedi mind tricks and telepathy by flooding their minds with useless and redundant thoughts.

After the Jedi Civil War, many former Assassins returned to relatively peaceful life, among them Atton Rand, who later became a smuggler and even later, in an ironic turn of events, allied with the Jedi Exile and became the pilot of the Ebon Hawk. However, Darth Sion kept a number of Sith Assassins at his disposal, most of them located at the Trayus Academy on Malachor V. Most of them were later killed by the Exile.
Dex: 3D+2
Blaster: 6D
FireArms: 7D
Dodge: 6D+2
Melee Weapons: 6D+2
Missile Weapons: 6D

Page designed in Notepad, logo`s done on Personal Paint on the Amiga.
Stats by FreddyB. Descriptive Text and Image is from Wikipedia, copyright remains with LucasArts / BioWare.
Any complaints, writs for copyright abuse, etc should be addressed to the Webmaster FreddyB.