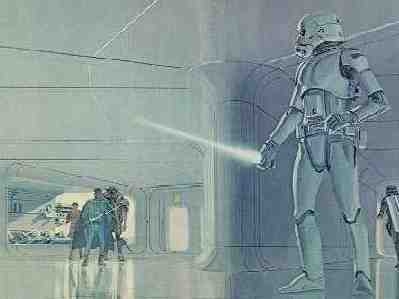 
The Storm Knights were originally founded shortly after the Empire joined in alliance with the Sith, they were force sensitive Storm Troopers and other Imperial officers who were trained in the use of The Force by the Sith. These were a few elite troopers used against the few remaining Jedi, and in other extremely important and secure locations. However new Storm Knights started to appear in larger numbers and not even the Sith knew where they were coming from. The truth was that they were clones of the other Storm Knights, however their force potential was being boosted by draining it from clones of Sith warriors.
Dex: 3D
Blaster: 4D
Dodge: 5D
Lightsaber: 5D

Page designed in Notepad, logo`s done on Personal Paint on the Amiga.
Text completely by FreddyB. Image is by Lucasfilm, copyright remains with them.
Any complaints, writs for copyright abuse, etc should be addressed to the Webmaster FreddyB.