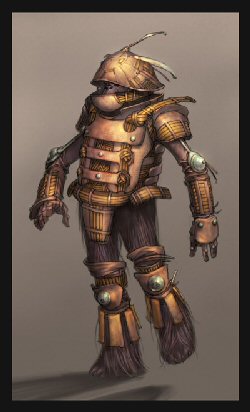 
Description: An ancient design used on Kashyyk in the rare times of warfare, using some of the iron hard Wroshyr wood woven together using the silk of the deadly Webweaver which is almost immune to cutting. Although primitive as well as bulky and heavy, the natural components of this armour are so tough and damage resistant that the resulting armour is very tough beating most non-powered armours. The silk used in the contruction of the armour is very difficult to obtain in any large amounts, since the Webweavers trail long and extremely sticky strands across the jungle floor with the large amounts needed to construct anything only available in their nests and can only be harvested by killing the Webweaver itself, which like most of the ground dwelling animals on Kashyyk is a very dangerous opponent. Young Wookiees often choose the Webweaver as the target of their coming of age hunt, using the occasion to harvest the silk they may need at some future time for the construction of a set of armour, braving not only the dangers of the planets surface, but also seeking out a Webweaver, a creature they will spend the rest of their lives trying to avoid. During the Imperial occupation of Kashyyk the armour was declared illegal, and most of those trained in its construction were killed making the armour even rarer and more difficult to obtain.


Page designed in Notepad, logo`s done on Personal Paint on the Amiga.
Text completely by FreddyB. Image is from Star Wars: Galaxies, copyright resides with Sony Interactive/LucasArts.
Any complaints, writs for copyright abuse, etc should be addressed to the Webmaster FreddyB.