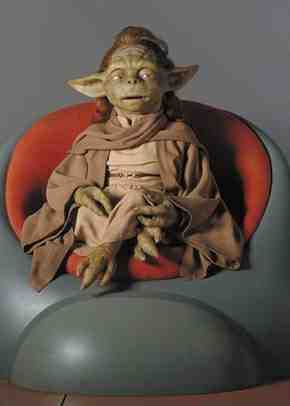 These are the known powers Yaddle possessed and it is believed that she had access to other powers.


The quiet Yaddle was a member of the same mysterious species as the revered Jedi Master Yoda. Yaddle sat on the Jedi Council with her fellow green-skinned diminutive Force-user.

At 477 years of age during the Battle of Naboo, Yaddle was considered young for her species. Still, with over four centuries of living, many legends have arisen regarding the tiny Jedi Master. Tales are told of her former mentor, Polvin Kut, and how she was imprisoned for over a century on the world of Koba. Few know which of the many stories that propagate about Yaddle are true and which are pure legend.

Yaddle had trained many apprentices in her past, including fellow Council-member Oppo Rancisis. Yaddle's last known Padawan was the vain and confident Empatojayos Brand, whom Yaddle successfully trained to become a Jedi Knight.

Not as martial a figure as her fellow Council-members, Yaddle was the head of the Librarian's Assembly of the Jedi Temple, and worked alongside such revered Jedi scholars as Ashka Boda in maintaining the Temple's impressive collection of holocrons, scrolls and tomes. Exposure to obscure knowledge granted her powers that few can fathom, including the forbidden Jedi art of morichro, a technique that rapidly slows the body functions of target beings.

When not on Coruscant, Yaddle resided at the Jedi training center at Kamparas, offering important lessons to initiates in the order.