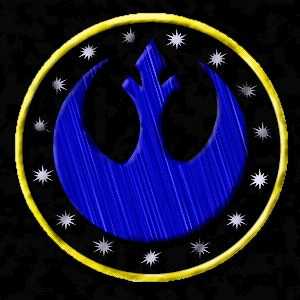 The History of the New Republic is a short one, although it as its roots in the 25,000 year history of the Republic. After the Emperor declared the dissolution of the Republic and the creation of the Empire, a number of Senators from the dissolved Republic Senate who had opposed this came to the conclusion that the time for peaceful and political protest was over. These senators formed the Alliance for the Reformation of the Republic, more commonly known as the Rebel Alliance. The Alliance battled the Empire for a number of years, and although they were widely supported few planets dared publicly to support the Rebellion. Despite this they managed to win a couple of important battles, the most famous one being the battle of Yavin where they destroyed the Imperial battle station the Death Star.

Shortly afterwards they were tricked into making their attack on the second Death Star around the forest moon of Endor. But from a trap they managed to turn this into a massive victory not only destroying the Death Star, but killing Emperor Palpatine as well. It was the first step towards legitimacy for the Rebellion, within a few days the Rebellion and the governments that dared to support it (Chadrilla, Kashyyyk, Calimari and Sullust being the main ones) declared themselves the Alliance of Free Worlds. This allowed them to speak to other governments, and about 6 months after their victory at the battle of Endor they founded the New Republic.

With legitimate support and bolstered forces, the New Republic began forcing the Empire further and further back, but as more planets were liberated from the Empire, the Republic had devote more of its attention to aid and support for the planets liberated. So the progress slowed until the Republic stabilised controlling two thirds of the Empires former size four years after the defeat of the Emperor at Endor.

It was then that an ancient enemy of the Republic stuck, the Sith, although individual Sith had caused trouble for the Republic over the Millennia, the Sith Empire itself had been hiding from the Republic for almost five thousand years. The Sith attacked using a massive starship called the Scythe, capable of destroying entire planets. They attacked first at Teta IV in the Princess Teta system, then later attacked and destroyed Coruscant the capital of the Republic, killing billions of people. The Republic succeeded in destroying the Scythe, but this only made matters worse as it forced the Sith into an alliance with the remnants of the Empire, but roughly around this time fortune smiled on the Republic. The Mandalorian Empire having been at war with the Sith for almost 50 years, and although they had a long history of fighting the Republic, a fortunate occasion when some agents of the Republic saved the Mandalorian Emperor healed a lot of the tension between the two sides. So facing the same enemy the two sides forged an alliance to defeat the Sith and their Imperial lackeys.

The New Republic is fighting for its life, with many of its higher ranks decimated when Coruscant was destroyed the Republic is suffering at the well-organised hands of the Greater Sith Empire. The Republic intends only to survive and to protect its member planets, to this end it is willing to forgive thousands of years of trouble between itself and the Mandalorian Empire, with which it is attempting to cement a lasting relationship.

Long term the Republic would like to see that the world currently under enslavement from the Sith and the Galactic Empires are freed.


Page designed in Notepad, logos done on Personal Paint on the Amiga.
Text completely by FreddyB. Image is copyright Lucasfilm.
Any complaints, writs for copyright abuse, etc should be addressed to the Webmaster FreddyB.