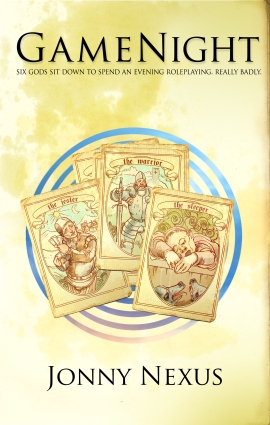 What is it ? : Its a book by Jonny Nexus, and although I never received a review copy (which I have done with everything I've reviewed in the past, but then again, Jonny was asking for people who wanted review copies and I never got in touch with him) originally RPGGamer.org was somewhat based on Jonny's Critical Miss website (the Last Words section of the site especially), so I felt somewhat indebted to him for being the spiritual grandfather of the site and wanted to review the book to add (in a very small way) to the publicity for it.
The back blurb on the book reads

A ten-thousand-year quest is about to be completed. Prophecies will be fulfilled, ancient riddles answered, legendary evils bested, and the nature of the universe revealed. All that's needed is a band of mighty heroes to do the completing. Unfortunately for the locals, some of the gods have taken a personal interest in the chronicle of these heroes' adventures. Now they are each guiding one of the characters towards the conclusion of their epic journey. That is, when they're not squabbling, backstabbing each other, blowing things up by accident, refusing to play by the rules, and turning the AllFather's creation into a mess of petty arguments, fantasy clich?, gratuitous combat and unnecessary dice-rolls.

If you thought your games group couldn't be any worse, Game Night shows just how bad things can get when a bunch of unruly deities decide they want to play. And may the heavens help us all.

Basically, its a book about a bunch of gods sitting around a table manipulating the lives of mortals in one of the dimensions that the head god (the AllFather) has created, this manipulation is done in the style of a Role Playing Game, right down to the rolling of dice, the rules lawyering, the take backs and the bitching that playing an RPG involves.

High Points : Well to put it simply, its funny stuff, the idea of Gods playing an RPG really grew on me as the book went on, the situations caused in the player character (the Mortals) as the Gods take back what they've said, discover that they've been taken literally, etc is really laugh out loud funny (eg. When one of the gods throws a strop about their character not doing something because they never said they were doing it, they act childish, and complain that they've never said their character has been going to the toilet either so they're going to go now. Then in the game the character suddenly finds himself urinating in front of the person they were talking to, totally unable to understand why they decided to do it. Less funny when I write it out, but the set up and description are totally spot on). The plot line of the adventure the "mortals" are involved in is actually pretty good too, I really found myself getting into it.

Low Points : Well, I found it difficult to get into at first, it swaps between the mortals and the gods several times per page, often swapping every paragraph, which I found to be distracting and made it difficult at first to get into either of the two storylines or settings. Although it hits its stride later on, and I actually became somewhat connected with most of the characters (difficult with it making a fairly large cast for such a short novel with 5 gods and 4 mortals). The characters are fairly stereotypical, but maybe not chosen particularly well, "the sleeper" for example was a perfect example of a player I could recognise and name from my current RPG group, but apart from him sleeping, being disoriented and mainly just saying "I follow him", he prove to add little to the narrative (in fact I thought there were missed opportunities with that character, the movie Gamers handles it especially well with the player who turns up late having a character which zombies around with the rest of the party, sometimes disappears when forgotten about, and then when he turns up, bursts into life and saves the day).
The final criticism I've got, is not in the writing, but in the editing. Having been involved in the writing of a book fairly recently (I wrote a technical chapter in a marketing book earlier this year), I recognise the power of a good editor. They really can make all the difference in a book, from simple proof reading and fixing spelling and gramatical errors, through to asking for rewrites on sections. While Game Night flows pretty well, it does obviously change in style as the book goes on, going from obvious jokes and a very sketchy plot, through to a stronger plotline and deeper less obvious jokes, there are also numerous spelling and typographical errors (although I've been told the version I've got is actually much better than the original). I don't know if Jonny had an editor, but its obvious that the book could have done with it, changing it from a good small print novel, into just a good novel.

So what do you really think ? : Well, I enjoyed it, and perhaps the best recommendation I can give is that it made me late for work this morning. I was a few pages from the end, I had to leave for work, but just had to finish it, and ended up missing my train because of those last 10 pages. Thats definitely the first time in the 3 years I've had my current job that a book has made me late, and definitely the first time in the last decade its happened. It really got me hooked in to find out how it ended. While I wasn't sure I liked the idea of it being Gods doing the gaming, and wondered in the early chapters if it wouldn't have been better if it had just been ordinary gamers, I ended up agreeing with Jonny's choice, and enjoyed the godly aspect of the players and gamesmaster (the AllFather is finishing up the game so he can talk about it at a conference for gods that he is about to go to, he really worries about "Mr Six Days" (who is obviously the Judeo-Christian god) who boasts about his scientific reality which is superior to the fantasy realities the other gods have created), and although the idea of gods using 21st century language is pretty jarring at times, it doesn't distract from the humour (or necessarily add to it as I think the author wanted it to).

Final Words : Okay, as a gamer I'm the target audience for this book, and as a fan of Jonny Nexus I was probably going to like it unless he totally cocked it up. He hasn't, and while the book does take a while to get going, I did really enjoy it, and am especially looking forwards to the short story prequel he's planning on writing, hopefully he will be able to keep the momentum he built going. I highly recommend the book, give it a try, while I doubt anyone will think that it equals Terry Prachett or Douglas Adams, I do think that most gamers will enjoy it, and lets be honest there so few of us about, that when one of us does something this good, we should all get together and support one of our own. So I urge you, go out and buy a copy. 8/10

Head on over to the Game Night Website where there`s a free chapter of the book, links to a bunch of far better written and more comprehensible reviews, some youtube videos Jonny's put together to publicise his book, and links to places you can buy the book (mainly Amazon to be honest).

Page designed in Notepad, Logo`s done in Personal Paint on the Commodore Amiga
Review text by FreddyB, quote and book cover by Jonny Nexus's Game Night
Images stolen from an unknown website at some remote time in the past.
Any complaints, writs for copyright abuse, etc should be addressed to the Webmaster FreddyB.