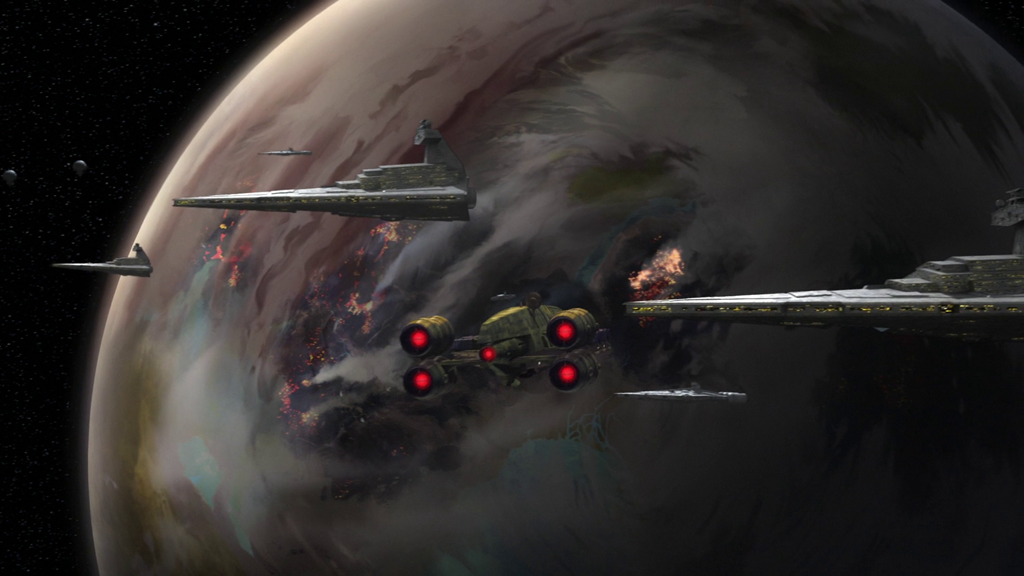 What is it ? : Returning from a mission to Yavin IV, Ezra jerks awake from a force vision about Ryder Asadi and Lothal, the rest of the team sympathise, but there's nothing they can do to help the world yet. However on landing, Ezra is summoned to see Mon Mothma, who reveals that communication with Ryder and Lothal has been cut off, and she orders him to return to the world to discover what is happening, the rest of Spectre team decides to go with him.
They leave the Ghost with Kallus and Rex, who momentarily discuss who is in charge, Kallus remarking on his command of Star Destroyers, and Rex telling him that is why it shouldn't be him. And they board the Broken Horn, trading Puffer Pigs to Vizago in exchange for him using his permits for access to Lothal to smuggle them in.
They arrive in orbit and are disconcerted by the appearance of the planet, it's skies appear to be burning and are massively discoloured with pollution, as they head into the atmosphere, Ezra can see that the grass plains appear to have been burned, and the Broken Horn is escorted in by Tie Fighters.
Upon landing, the see Imperial troops coming to search the ship, and guess their life signs were detected on the way in, so the release the puffer pigs as a distraction and sneak into the town of Jhothal.
The team splits, with Hera, Kanan and Zeb searching for transport, and finding all the speeders have been impounded, but not before Kanan and Hera get to spend a moment together, Kanan wishing he could see Hera again, and Hera telling him that he always "saw" her, before they are interrupted by Zeb.
Ezra, Sabine and Chopper head to Old Jho's bar, Ezra commenting that it was always the one place the Empire never had influence, and that the community would never stand for anything happening to Old Jho.
They enter the bar, but discover it under new ownership, Baron Valen Rudor now runs it, explaining to them that Old Jho was arrested and executed for aiding the Rebellion. As they head to leave, Rudor calls on Stormtroopers to stop them, and they are aided by a young man who calls Ezra Oleg, and pays for their drinks, which they have neglected to do in their rush to leave.
Outside, Ezra recognises the young man as Jai Kell, who he met when under cover at the Imperial Academy. Hera, Kanan and Zeb arrive in a stolen speeder, but it is soon destroyed by Imperial tanks, and the Rebels flee into the streets of the town, misdirecting searching Stormtroopers. Jai leads them into the sewers, where they are tracked by Probe droids, and have to destroy them and fight following Stormtroopers, before Sabine recognises her own art that is used to mark the Rebel path through the sewers. Emerging from the Sewer, they find Ryder Asadi awaiting with a U-Wing, and they board fleeing the following Imperials.

High Points : This is a dark episode, with the return to Lothal marked by the heroes witnessing the destruction of the environment of the world and of the execution of long standing characters. Jhothal, a town the characters have mockingly defeating the Imperials in back in season 1, now is a dangerous place, the safe place of Old Jho's bar now run by an Imperial officer, and filled with the sound of the Imperial March.
The appearance of Lothal from orbit is shocking, with massive fires covering the surface and dark clouds blocking out the sun. Ezra's return home finds it suffering under Imperial rule in a clearer way than we have ever witnesses before.
This clearly shows what the Rebels are fighting for, and shows their return home isn't a triumphant one, it's one which comes only at the suffering of Lothal and it's people.

Low Points : While a dark episode, this one is powerful and gripping throughout, with a sense of danger palpable as these places once so common in episodes, have now become dangerous.
My one slight criticism of the episode, is that once again it leads to the Rebels fleeing through the sewers, something we have seen so many times before, and it just feels a little old hat.

So what do you really think ? : A great episode, which effectively communicates what the Rebels are fighting for, not only does the Empire cause harm to the inhabitants of the world, but it's endless desire for weapons and goods to powers it's war machine is destroying the environment, possibly forever.
The only thing which stops me handing out an even higher score is that it does seem a little samey when they are escaping through the sewers, we've seen Lothals sewers in numerous episodes, you'd think the Empire would have a better way of securing them by now.

Final Words : So, the Tie Defenders are being made out to be the big threat to the Rebellion this season, which I'm not totally sold on, it just doesn't seem very Star Wars. While the Tie Defender, which is a better performing starfighter than anything the Rebellion has might lead to more victories, we're used to grand gestures from the Empire. Death Stars and the like, where the might of the Empire is obvious and visible, and just another starfighter doesn't really sell me on the crushing might of the Empire, and sabotaging a factory doesn't really sell me on plucky Rebels overcoming this might.

Finally, I must comment on Mon Mothma's pronunciation of Lothal, she calls it Lothl, swallowing the a, which I found odd, but strangely satisfying.