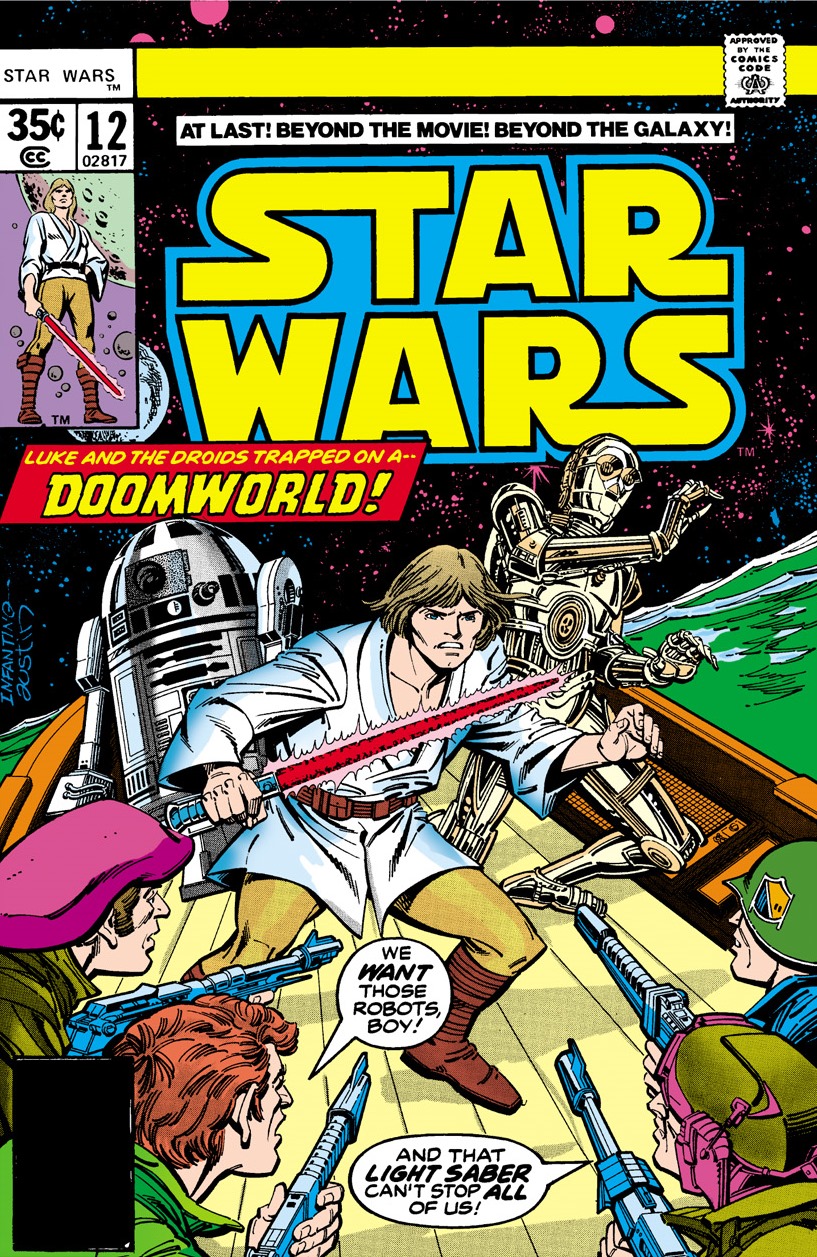 What is it ? : Luke and the droids are floating in an escape pod in the seas of Drexel watching the sea dragon attack the wreck of their ship, when another arrives ridden by a man controlling it with a staff. They then see skimmers approach, and a battle break out, before they are retrieved by one of the skimmers.
The occupants are looking for salvage, and see the droids as especially valuable, but Luke engages his lightsaber, and is recognised by them as a Jedi.
They take him back to their floating city, which is built upon a giant wooden ship, where he meets with their leader, Governor Quarg, who although displeased with the loss of skimmers in the battle with the sea dragons, is intrigued enough by the presence of a Jedi to talk with Luke.
Meanwhile, Han is continuing his charade with Crimson Jack that he will lead them to a Rebel treasury on Drexel, which they can raid together. Crimson Jack reveals to Han how he obtained the Cruiser (some kind of Star Destroyer) that they are aboard, and how he has plans to become more than just a Pirate using the power of the vessel and the allies that helped him refit it.
However, when they arrive at Drexel and discover there is no land for a Treasury, Jack turns on Han, suspecting his lies.

High Points : The floating city on Drexel is amazing, resembling a traditional wooden sailing ship, but on a massive scale, so that buildings are not only built along it's deck, but also on the masts and beams, so it is partly giant sailing ship and partly cityscape. It's definitely one of the most creative environments I've ever seen in Star Wars.

Although never named, Crimson Jack tells Han how he came upon his cruiser damaged and mainly abandoned after the "Rebellions first victory", which we now know to have been the Battle of Scarif. He found it floating in space, and it only managed to launch a couple of Tie fighters against his pirates. He then found backers to help refit the vessel, who could appreciate his ambition with the capital ship.
It surprisingly fits into the modern Star Wars continuity that Pirates would have been able to raid the debris field left after the battle of Scarif and make off with a Star Destroyer. From the movies, we saw many ships were damaged, and the planet itself would have been unable to help. Most of the Imperial fleet moved on with the Death Star, so it really is conceivable that there would be vulnerable and crippled ships left in orbit around the devastated world.
I'm genuinely impressed by the fact that the writers fit Jacks storyline into the overall background as stated in the scroll at the beginning of the original movie.

I must also complement the designs of the sea skimmers, they definitely look of a similar design to Luke's Landspeeder from A New Hope, and the twin laser cannons on the front give them a military spin which we'd not seen at this point of Star Wars vehicles.

Low Points : There's not a lot to hate in this issue, and while I'm not too impressed with the Dragon riders, it's just a little too fantasy for me, I'm can't really count them as a mistake or low point of the issue.

So what do you really think ? : The contrast between the two parts of this story is excellent, with Han bluffing his way around pirates that he understands all too well, and Luke trying to work out what's going on with the inhabitants of Drexel, with Dragon Riders, wooden cities and their desire to obtain scrap, especially the parts within his two droids. It's an interesting contrast, and with Han trying to not only extricate himself and Leia from the grasp of Crimson Jack and his pirates, but also use them to help rescue Luke from whatever situation he is in, the story is kept tense and in motion throughout.

Final Words : My assumption I made last review, that the Pirates would end up fighting the Dragon riders, now seems to have been premature, and perhaps there's something more interesting going on, as although Han seems clear to be luring the pirates into conflict with forces on Drexel, the fact that there are the Dragon riders and Governor Quargs faction makes the situation more fluid and not as predictable. I guess I'll see how things continue.