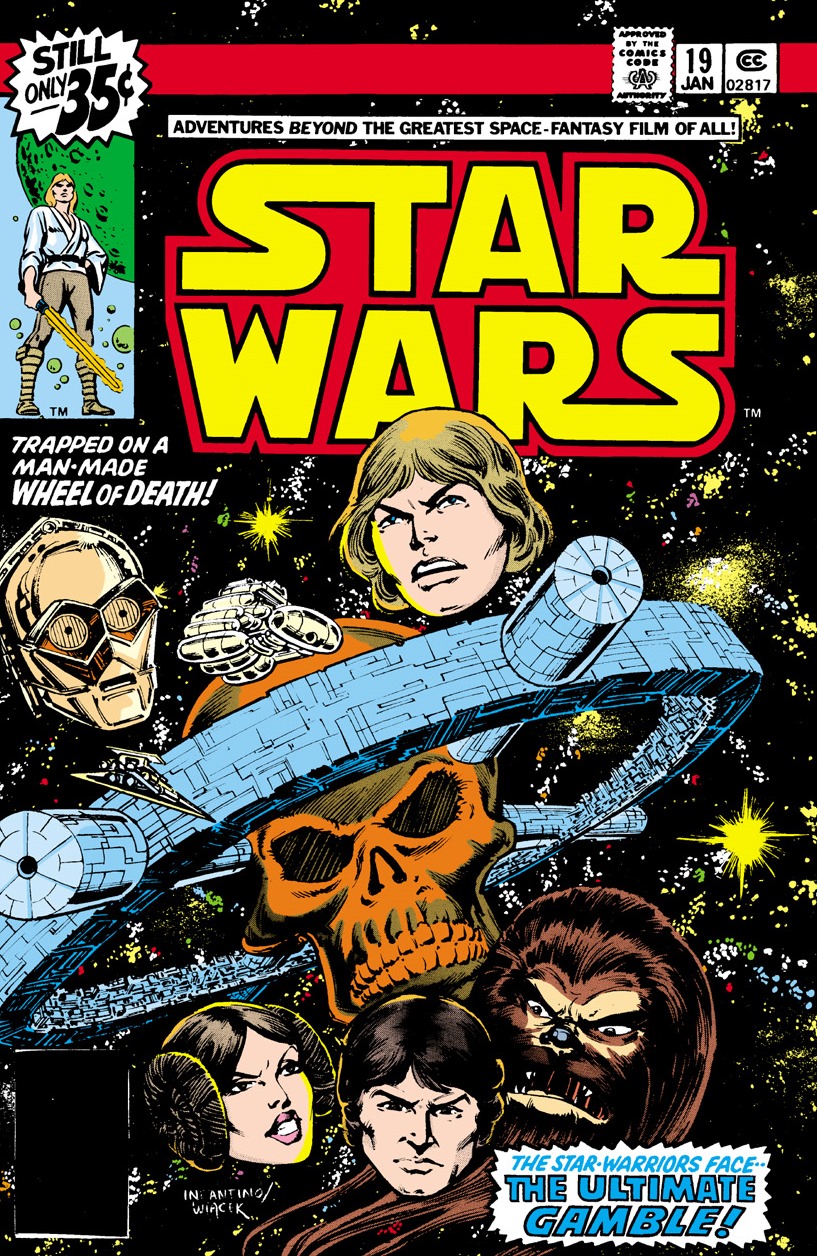 What is it ? : So we pick up from last time with an image almost identical to last issues cover, with Stormtroopers catching up to R2-D2 and C-3PO attempting to take Luke to get medical aid because of the coma he has fallen into. R2 slams a bulkhead closed on the firing Stormtroopers, causing their shots to reflect back on them, and for the droids to escape.
Watching them, Master Com is impressed, and asks Greyshade whether they should capture and interrogate them, but Greyshade is only interested in getting his hands on Leia.
Meanwhile Han and Leia come under fire as well, and are captured by Stormtroopers, however the situation is reversed on the Stormtroopers when the guards in the Wheel have the higher ground, and force the Stormtroopers to hand their captives over. The two are seperated, with Leia taken to Greyshade and Han taken back to the Falcon so the guards can search for the money stolen from the raided TaggeCo transport ship.
Chewbacca evades capture, reaching the upper habitation areas, but is discovered by guards since he has not established a credit level for gambling. He brawls with a heavily muscled warrior, easily defeating his, but is stunned by other guards, attracting the attention of patrons who gamble on the fight. He is taken to holding, and given the option of being handed over to Imperial Slavers and taken to work in the Spice Mines of Kessel, or becoming a Gladiator with a chance of winning big.
Leia and Greyshade talk, and Leia tells him of the way the Empire is framing the Rebellion for raiding the transport, and Greyshade sees a pattern to it which matches the Empire. But they are interrupted by Strom, who shoots down Master Com and accuses Greyshade of consorting with Rebels.
However, Master Com emerges in a new body, using defensive weapons to disarm Strom, and Greyshade makes a deal with him to conceal his efforts to steal money from the Wheel and endanger it's tax payments, becoming partners on the robberies. Strom asks about the Rebels, but Greyshade assures him that they are prisoners of their own making on the Wheel, but if they do escape, they'll have to leave through his patrolled space and will by Strom's once again.
R2-D2 and C-3PO have reached medical with Luke, who is being treated under orders from Master Com,. however this turns out to just be R2 hacking the computer systems. The guards arrive and lay claim to the Droids, telling them they are now property of the Wheel, because Han has pawned them to raise a gambling stake.
Han is released, but the Falcon has been seized against owed docking fees, and Han is using the money raised from the Droids to gamble and attempt to win enough to get his ship back. But he fails and loses everything, being left penniless, however the droid bartender informs him he still has one option, sign up as a Gladiator and gamble his life, which he does.

High Points : With the heroes split into 4 groups, and the tale following Greyshade and Stroms machinations as well, there's a lot of jumping around in this issue, which means there's a huge amount going on. Once again, far more than I would have ever expected of so few pages.

They've created an interesting opponent in Simon Greyshade, who is definitely the bad guy in the story, without being a mustache twirling bad guy out to do no good. He simply wants to make money, and quickly and intelligently makes deals to ensure his position and profits. The way he deals with Han is smart and efficient without locking him up, making him gamble away everything he has until he is forced into a situation where he must gamble his own life, without realising that Greyshade has fixed the outcomes all along.

Low Points : The one part of the story I do feel lets it down slightly is the ease with which Chewbacca is located, within seconds of him reaching the habitation areas of the station, and apparently after handing over his weapons, he is found. It just seems a little rushed and convenient for moving the plot along. He manages to evade the guards, only to be discovered because he has no credit, and while he gets an interesting brawl, he apparently just has handed his weapon away unseen.

So what do you really think ? : I'm enjoying this story a lot, although have no memory of it from my youth, although seems obviously to be forcing Han and Chewie into a gladiatorial combat, which I'm sure they will help each other and escape, although hopefully the story won't be as straightforwards as it currently appears to be.
Greyshade is definitely one of the more interesting villains we've seen in Star Wars, not working for any nebulous evil intentions, purely just for financial profit, and is getting the Rebels to get themselves further and further into trouble by simply stacking the odds against them, and letting them do the work. With Han already separated from his friends, without the Falcon, and having pawned the Droids, he is now reduced to gambling with his very life in a rigged game. He is playing within the rules of this place, without even realising that there is no way to win.

Final Words : With Han, Leia, Chewbacca and the Droids all separated, I'm intrigued as to how Luke fits into the story should he awaken next issue, with everyone else playing their parts in this trap, he seems to be the one character who doesn't fit, and his basic heroics may break the system that Greyshade has rigged against them.