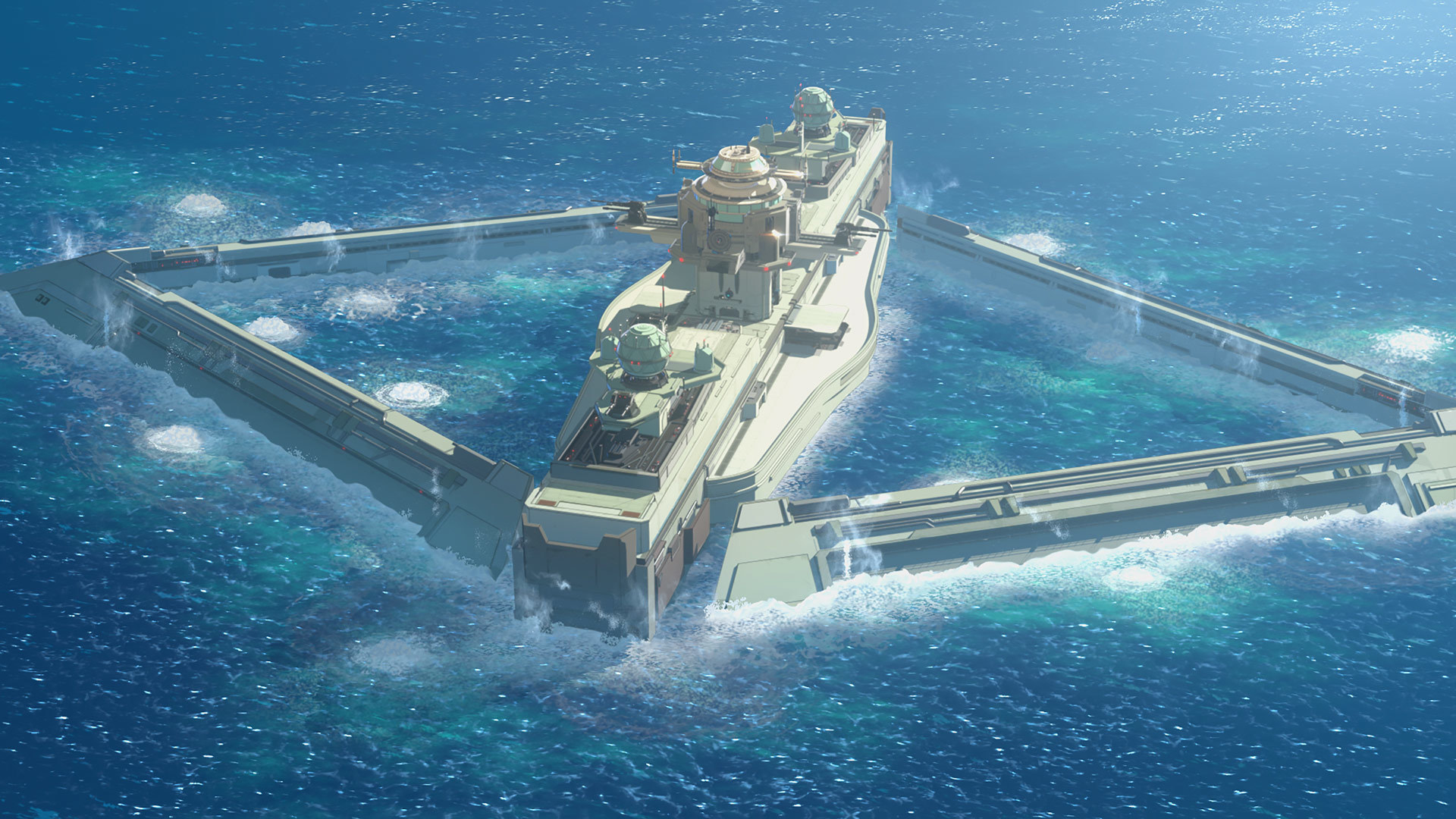 What is it ? : Kaz and his friends are being arrested by the First Order, when Yeager gets his Astromech, Bucket, to create a cloud from his fire extinguisher under which Kaz, Yeager and Neku escape from the garage, although Tam remains behind not understanding why they are being arrested or resisting arrest.
Chased by squads of Stormtroopers through the station they become corners when the Chelidae rescue them and take them to the children, Kel and Eila who offer them a hiding place in the lower structure of the platform.
Kaz devises a plan to lower the entire structure into the water by flooding it's tanks with seawater and switching off the motors which keep the station buoyant, until only the jammer is above water, which will allow them to swim to the jammer to disable it and call for help from the Resistance.
The inform Captain Doza to close all the hatches so the interior of the station won't flood, and he agrees.
Meanwhile Tam has been taken into custody by the First Order and is interrogated by Agent Tierny. She asks Tam about any contact with the Resistance, which Tam denies, but admits that Poe Dameron is a friend of Yeager and Kaz'. She is then shown Kaz's records as a New Republic Pilot, and as a member of an affluent Hosnian family, completely at odds with his story of being poor and from Coruscant. Tam sees that her friends have been lying to her, but the interrogation is interrupted as the station begins to sink into the sea as Kaz shuts down the motors.
Yeager, Kaz and CB-23 swim out of the sunken station, approaching the jamming field transmitter on the roof, and the three of them disable the jamming. CB-23 then transmits the distress call to the Resistance, but as they receive a response, they come under fire by Commander Pyre and some Stormtroopers.
Yeager is captured, but Kaz and CB-23 make their escape with the response, and once safely back with the Chelidae, they replay the message which is Princess Leia who tells them the Resistance is too few in number and too stretched to be able to help, sending coordinates for Kaz to get to the Resistance base. While the rest of the listening group despair that they're on their own, Kaz rallies against the news, declaring they're not alone because they've got each other, and they're going to save their friends and liberate the station.
Meanwhile, the Pirate gang who plagued the station have overheard the signal and Synara looks on with concern.

High Points : Another pretty good episode, although this one didn't seem like it progressed the main plot by much, Tam remains on the fence, although looks more and more likely to end up part of the First Order, the Station remains under First Order rule, and the entire resistance on the platform seems to amount to Kaz, Neeku, the two kids and an Astromech (with some support from Torra Doza and her father), which doesn't seem like a lot to me.

I will admit that they've got me genuinely interested as to where the story goes from here. Will they liberate the station? Will they retreat to a Resistance base to join the wider struggle against the First Order? (the liberation of Colossus station becoming more like the liberation of Lothal in Rebels, to be achieved over a number of seasons?), Tam was shown the pilots lounge during her interrogation, which was empty, so where have all the Ace's gone?
I've got a lot of questions, and am definitely interested in what happens next, which is a surprisingly positive move for this series which I'd pretty much written off only a few episodes ago.

Low Points : I'm slightly annoyed as to the response they get from Leia during this episode, as we're not given enough context. Is this before the battle of Takodana? And this just signals that the Resistance is tiny and overwhelmed, and always was? Or have the Resistance force become tied up by the events of The Force Awakens and are away destroying Starkiller base (and therefore Kaz's family are already dead)?
I think it's probably the former, as we've not really had much time pass since Poe set off for Jakku, and I'm very doubtful that we're into the events of the Last Jedi and Kaz, Neeku, two kids and a Droid might actually make up a fairly large percentage of the Resistance. But it would really have been nice for them to let us know.

So what do you really think ? : Although it really doesn't stand on it's own feet particularly well, it's setting things up nicely for what should be a decent season finale, which I'm looking forward to seeing.

Final Words : Well, if nothing else, Resistance has improved in leaps and bounds in the last few episodes, and while it's still not a very good series, at least it's not actively bad anymore. Two episodes till the end of the season, and I'm actually hopeful that it will turn out to be not too bad overall.