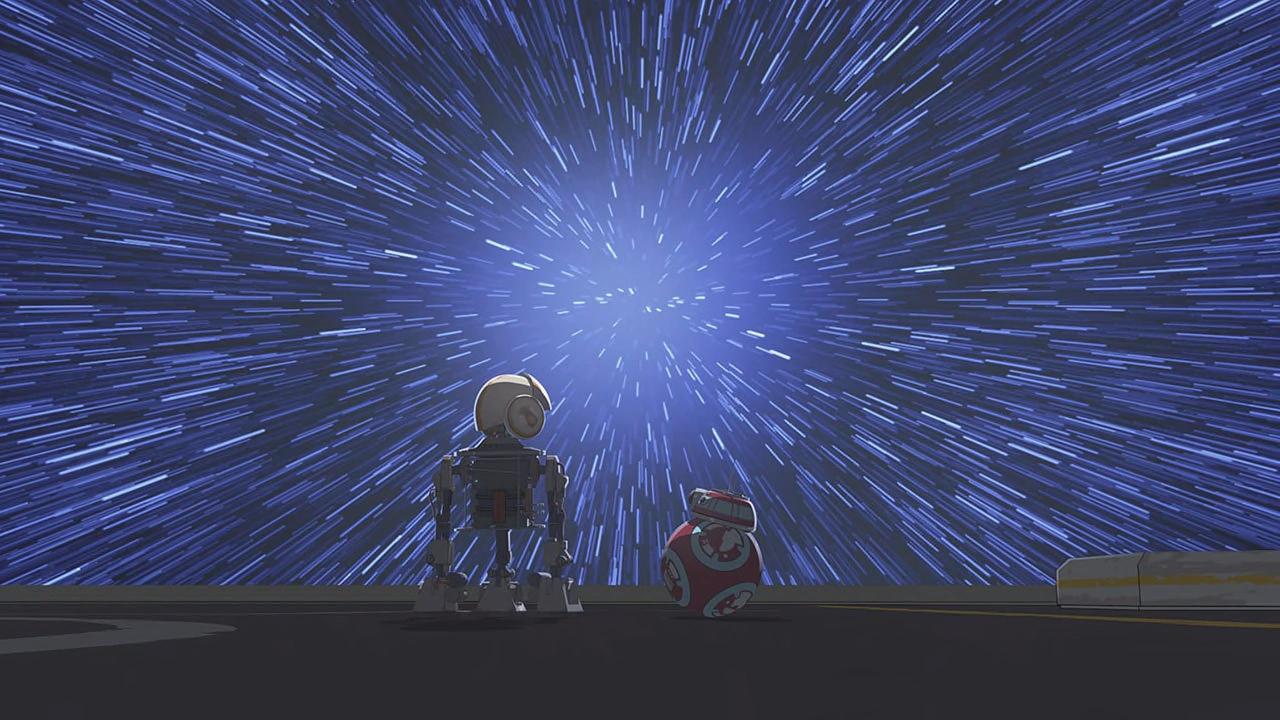 What is it ? : The episode (and season) begins on Castilon, as a Speagul takes flight after resting on the solar collector of a crashed First Order Tie Fighter, the wreckage of the battle and the escape of the Colossus float in the sea as a racing ring hovers overhead. The camera rushes up from the sea into orbit, where a First Order Resurgent Class Star Destroyer waits, aboard the ship Commander Pyre and Agent Tierny report to Captain Phasma that the Colossus has escaped, and she tells them that they'd better find, capture or destroy it or she'll put them to death.
They have Tamora Ryvora brought in, and she tells them that Poe Dameron was a friend of her employer, Jarek Yeager, and that he left his Astromech with them, but she didn't know that they were working with the Resistance. She pledges to help the First Order track down her friends, telling them that she is an excellent pilot, and she is inducted into the first order and given the title Cadet Pilot DT-533.
Meanwhile aboard the Colossus, CB-23 and Bucket watch hyperspace as the Colossus emerges in deep space. They have no idea where they are, and Captain Doza takes Neeku and Kaz to the bridge which they've reactivated now the ship is in space.
They discover that they are 3 parsecs from D'Kar, and that there are numerous malfunctions aboard the ship, so the Captain sends Neeku, Kaz and his daughter Torra to repair the gravity systems and the communication systems, both of which are out. They swim their way down to the maintenance centre, and discover that the Chelidae have withdrawn into their shells as they sense danger. Neeku attempts to convince them to help, but one warns him he should leave. Kaz and Torra attempt to repair the systems, sending CB-23 to restart some systems, however he is ambushed and deactivated by the First Order Astromech droid, MB-13A which has been hiding aboard the giant vessel.
After they notice that CB-23 is missing, Neeku goes to find out what is happening, and is restrained by MB-13A, and Kaz attempts to reactivate the gravity systems which keep cutting out.
Meanwhile in Aunt Z's tavern the inhabitants of the Colossus, and the Pirates who have joined them are enjoying a Zero G party, which they continue to have even as gravity repeatedly smashes them off the floor before allowing them to float away again.
Kaz and Torra now head to find out where Neeku and CB-23 are, only to discover a restrained Neeku and a hostile MB-13A, who Kaz lure away so Torra can rescue Neeku, however she follows, and they discover that the droid has been waiting for them to repair the communications system so it can send a message to the First Order informing them of the current location of the Colossus.
Neeku reactivates CB-23 using only his feet, and Kaz opens an airlock, forcing MB-13A to be sucked out of the ship, but it catches onto his feet and stops itself, however CB-23 helps Kaz, and they lock the First Order droid outside and leave it to float off, before they finally repair the gravity systems.
Kaz misses his friend Tamora, so sends a signal apologising to her commlink, knowing there is a risk of the signal being traced back to him.
Tamora receives the message as she finishes changing into her First Order Tie Fighter Pilot's uniform, and she switches it off before Kaz can explain, and she discards the commlink.

High Points : The episode begins with a darker version of the Resistance music, and I honestly think they are trying to keep this show as Resistance but darken the tone slightly. Which I must say works, I honestly enjoyed this episode, even if the fact that the majority of it was Tam telling the First Order that she's fine with doing terrible things because her friends lied to her, thereby proving that they definitely should have lied to her, and the hero battling an Astromech droid, hardly the most dangerous of opponents.

The part that I honestly enjoyed the most was the party in Aunt Z's, the inhabitants of the Colossus and the Pirates who have joined them were having a massively good time while the gravity was off. They've just finished a life or death battle and escaped against an overwhelming enemy force, and they're partying like there's no tomorrow. Something which was not only well done, but makes a huge amount of sense.

Low Points : Okay, it's Resistance, so there's bound to be a list here.

Firstly, it's nice that MB-13A knew where the Colossus was, and could inform the First Order, when the crew of the Colossus didn't know (it was waiting for them to activate the Communications system, and was the one to deactivate the gravity, something which happened before they discovered their location).
Also MB-13A is a surprisingly dangerous foe, but only if you don't carry a gun, and our idiot protagonist, his sidekick, and the ace pilot accompanying them, all don't bother to carry weapons even though they literally just left a battle. I know Resistance is for kids, so toning down the violence is probably something they want to do, but Clone Wars, Rebels and the movies are all fine with shooting things, especially a spherical droid.

Also Kaz is ridiculously concerned about his "friend" Tam, even going so far as to confuse Torra for Tam at one point. Last season Kaz spent more time with Torra than he did with Tam, Torra was his friend he went on adventures with (occasionally), whereas Tam was the one who constant tried to get him the sack and told him he was useless.
Not only that, but he's fixated on Tam that he seems amazingly unconcerned with the fact his homeworld was blown up only yesterday and unless he's amazingly lucky his entire family and everyone he knew before about 6 months ago is dead.

And Tam, she's incredibly vengeful at heart isn't she. When told that helping the First Order might mean that she'll end up hurting her "friends", she tells Tierny that they're not her friends any more.
Now I know that she is angry with Kaz and Yeager for lying to her, and lets assume that carries over to Neeku and Torra as well, but everyone else on the station, a place she's lived on for years, she's fine with them all potentially dying. Wow that's cold. She's a stone cold killer already, and has definitely found her place in the universe amongst the First Order.

So what do you really think ? : An excellent start to the season, Resistance improved a lot during its first season, going from virtually unwatchable, to pretty decent. And has started off its second (and final) season as pretty decent, so we'll see where it goes from here.

Final Words : I found it amusing during the opening moments of the episode, when Captain Phasma is threatening to kill Commander Pyre and Agent Tierny, that I'm aware she only has a day or two left to live. The attack on D'Kar is due any time now, and only hours after that she falls into a fiery pit to her doom (or so we currently believe), so she really doesn't have long to carry through her threat.