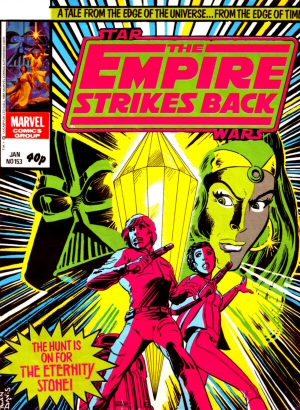 What is it ? : Luke and Leia have been taken captive by the Empire and are being carried aboard an Imperial Troop Transport, when it is ambushed by Guerillas hiding in the sand it is passing over.
The Imperial Officer begins to escape using a jetpack as the heroes and the Guerillas take out the Stormtrooper guards, firing his blaster at the heroes but seemingly missing. However this was his intention as he has fired a tracking bug onto R2-D2.
They board a repulsorlift transport to return to the guerilla base, where they discover that the plan wasn't just to free the heroes, but also to eliminate the Imperial Officer, Ryko Vant.
Meanwhile Ryko Vant has returned to his HQ in Jerne City, returning to his office only to discover Darth Vader awaiting him. Vader berates him for letting Luke and Leia escape, and when Vant tries to redeem his situation by telling Vader about the tracking bug, however Vader tells him he already knows where they're going.
Luke tells the guerilla leader, Meeka Reen, that they are trying to get to Adony Station, which Reen tells him has only crumbling old ruins, before they are informed by one of Reen's men about the tracking bug.
With the Empire possibly having been listening, Luke decides to tell Reen the truth. Luke had been reconnoitering the sector in a disguise freighter, when he encountered a vessel unlike any other he had ever seen. Boarding it, it appeared to use technology unlike any the Rebellion was aware of, and aboard they discovered tapes which took them a week to decode. The tapes revealed that the ship had been built by the Jerni, who were from this world, and they revealed that there was an item of interest to the Rebellion at the site of Adony Station.
Reen tells him that she's taking her men nowhere until she knows what they're looking for, so Luke tells her of the Eternity Crystal. A device which can wind time backwards to a critical point in history, and then allow time to continue from there along another path, such as a timeline where the Death Star didn't destroy Alderaan, where Vader was killed in the Battle of Yavin, or even where the Empire had never been formed at all.
He finally tells her how he and Leia came to Jerne, and were shot down by Tie Fighters, and captured from the wreckage of their ship when they crashed.
Reen decides to help them, threatening to kill them if the story is untrue, but secretly wanting the device for herself as she could use it to become Empress of the Universe.
Approaching Adony Station they see it is apparently lightly manned, however they come under heavy weapon fire as they approach causing a bloody and brutal battle, but one which is fortunately short as the Stormtroopers manning the Station are easily overwhelmed.
They begin searching the ruins for signs of the value containing the Eternity Crystal, and Leia spots a symbol she recognises from the recordings, but Luke is distracted when he spots signs of fresh concrete in the ruins construction.
Reen turns on Luke and Leia, seizing their weapons and taking them prisoner, while she prepares to use explosives to blow her way into the vault, which surprisingly enough easily succeeds. However as the guerillas charge into the vault, a second much larger explosion devastates the site, killing the guerillas in the blast.
A Tie Shuttle soon lands, and Darth Vader and Ryko Vant disembark, with Vader telling Vant that this entire situation was planned from the start. He had the Alien ship built and the phony recording planted with information about the Eternity Crystal, knowing that Leia would be drawn to the opportunity to save her beloved Alderaan, and she would walk straight into his trap.
As he and Vant search the site, Luke uses his lightsaber to cut his way through a piece of the ruins which saved them from the blast which had buried them alive. Knowing something was wrong due to the fresh concrete, Luke threw the two of them away from the blast, however he admits that the ruins which saved them were pure luck.
Luke grabs one of the guerillas remaining grenades, and throws it at Vader and Vant, killing Vant, however he suspects that Vader's armour will have saved him from the proton blast, and with that Luke and Leia sprint onto the Tie Shuttle and soar away, as they don't want to hang around to be sure.

High Points : Another tale from Steve Moore, and although again it doesn't feel 100% Star Wars, its a really strong and interesting story.
Although she betrays the heroes, Meeka Reen feels like one of the more modern additions to the Star Wars universe, a rebel (referred to as a guerilla in this story to draw some separation between the rebels and her group), who while fighting the Empire, isn't much more than a criminal in it for herself.
And it really makes her far more interesting for it, with it fleshing out the idea that in the desperate times of the Galactic Civil War, the Rebels will take help from any quarter, which adds to the Empires claims that they are criminals and terrorists.

And I have to applaud Vader's trap for Leia here, during Luke's telling of the story about discovering an ancient alien ship, and the records which revealed the Eternity Crystal, it seems totally in line with other ideas which the comics have introduced or unknown alien species and ancient superweapons and powers (for example last story we had The Five who had ancient knowledge, power and technology, and even a force sensitive demon), so the story sounds completely plausible. But when it's revealed it was all just made up by Vader, it's a brilliant revelation, and shows some evil genius in operation from the Sith Lord.

Low Points : Well, there's not a whole load to criticize in this story, while I mention above that there's a certain feeling that it's not really Star Wars'y, and feels a bit more generic Sci-fi, there's nothing major I can put my finger on which makes me feel that way.
In fact the more I look, the more elements that totally mesh this story into Star Wars, for example the use of the Imperial Troop Transporter (mentioned before in my reviews as one of the first toys which were made which didn't appear in the movies, but more recently used in the Rebels Series) and the Tie Shuttle, are perfect.
And the new vehicles to appear in the issue, Lukes freighter, and the Guerilla speeder, both look perfectly at home within a Star Wars tale, and even if the Alien Ship doesn't, it's supposed to be that way.
So, really, I've nothing to moan about for a change, except perhaps the fact that the heroes survive purely by luck and take out Vader purely by the convenience of some grenades lying on the ground nearby.

So what do you really think ? : A really solid and interesting tale, and one I really enjoyed.
When I write these reviews it forces me to think about the episodes and absorb them in more detail than I normally would, and sometimes this makes me realise that an issue or story that I'm reviewing, which seemed interesting at first, turned out to be quite empty, and full of problems I never noticed on a first look.
However, this is one where I enjoyed the story, but studying it made me realise the skill with which the tale is told, with attention paid to all of the elements that they were using to put it together.

Final Words : Well, next issue we'll be covering is the far shorter, and perhaps far odder, Tilotny Throws a Shape, which was used just a filler material as the rest of the issue reprinted the US story Coffin in the Clouds.