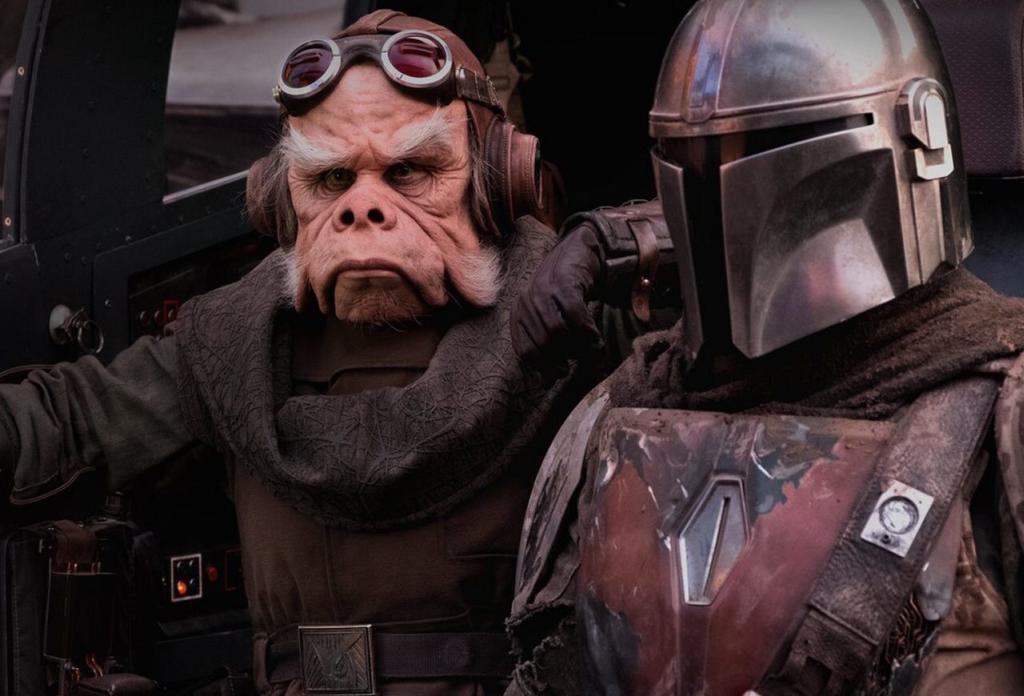 The Mandalorian: Chapter 2: The Child

What is it ? : The Mandalorian walks back towards his ship along with the child he has captured, when he is ambushed by a group of 3 Trandoshans, which he takes out in combat. Afterwards he notices that they have a bounty tracker, so there are multiple contracts out on the child.
He camps for the night, and repairs some damage to his armour, the child crawls towards his, reaching out to touch a wound on his arm, but he puts it back into the repulsorlift pod and seals it in.
The next day he clears a rise to see his ship in the valley below, he sees a Jawa Sandcrawler sitting next to it, and that the Jawa's have stripped his ship for parts. He snipes a couple of Jawa's, and as they flee he gives chase, clambering up the side of the massive vehicle, as the repulsorlift pod with the child in it follows. He makes it to the top of the Sandcrawler, and is shot by multiple Jawa's, the ionisation running over his armour and falls to the ground far below.
He heads back to his ship, to find it completely non-functional, all his weapons gone and large holes in the hull where it has been stripped of everything of value. So he returns to Kuiil, the Ugnaught who helped him ride the Blurrg last episode, and Kuiil takes him to the Jawa's to bargain for his parts back. Having nothing of value to the Jawa's, the Mandalorian agrees to get "The Egg" for the Jawa's, and heads off once more with the child in tow.
He discovers a cave in the desert, and leaving the child outside, he explores, only to be knocked out of the cave by a massive horned creature. As he gets back up, his chest armour buckled and twisted out of shape, he struggles to get his rifle ready to fire, but he gets repeatedly charged and trampled by the massive creature, and his once shiny and pristine armour is covered with dirt and dents. He struggles to get up once more as the creature charges to gore him with it's horn, when the child reaches out and uses the force to lift the creature clear of the ground, it's legs unable to push it forward it hangs there incapable of attacking, giving the Mandalorian a chance to stab his knife into a vulnerable spot on its neck, killing the creature, as the child slumps unconscious through the strain.
He finds the egg, and heads back to the Jawa's, who are about to give up waiting for him, and hands over his prize, which they crack open and start slurping down the yellow contents. He returns with the parts to the ship, and he and Kuiil restore his ship to operation in a repair montage.
He offers Kuiil a job in exchange for his help, and when he rejects that, he offers 50% of the bounty on the child, which Kuiil also refuses, so offers just his thanks, which Kuiil accepts, and thanks him for bringing peace to his valley.
The ship lifts off perfectly, and as they soar off into space, the child begins to rouse from its sleep, seemingly recovered from the strain of lifting the beast.

High Points : The Mandalorian continues to impress, and although there's not a whole load of story to get into in this episode, the effects and action particularly look amazing. The scene where he chases the Sandcrawler is definitely up there with the best action scenes in Star Wars, clambering up the side of the vehicle, as the Jawas try to knock him off by scraping the huge vehicle against rock faces, and by shooting at him from hatches on its side.

This episode definitely reminded me of the Lone Wolf & Cub stories, where a samurai with his infant child in it's babycart wander feudal japan and face various assassins and attacks. And that's no bad thing, as they are truly excellent stories.

Low Points : First of all, I've got to comment on the short run time of the episode, which is only 30 minutes long and feels it. I'd love to say that it doesn't overstay it's welcome, but it does feel a little short. But I suppose leave them wanting more.

When the Mandalorian has made his deal with the Jawa's, he's in the cockpit of the Sandcrawler, and it comically shows him ducking into the low room obviously designed for the smaller creatures. However, Sandcrawlers have always been abandoned mining vehicles that humans left behind, that the Jawa's claimed as their own, and the cockpits being designed for the smaller Jawa's kind of breaks that continuity. Although I suppose they may have remodelled the interior for themselves, but it doesn't seem to be something that they'd do.

There's also the fact that the Mandalorian is shot by numerous Jawa Ion guns, and falls unconscious from the top of the Sandcrawler. Ion guns have always been harmless to organics in Star Wars, so this is a pretty massive change, although again I suppose it might be the effect of being shot by so many of them scrambled the electric field within his body stunning him. But it's definitely a change, so worth mentioning.

So what do you really think ? : Another really good episode, which while I don't feel was quite as good as the first episode, I've given the same mark, as I marked the first one down slightly to give myself somewhere to go if the series got better than it's already excellent start.
I find myself wondering if all the episodes are going to be 30 minutes from now on, or whether they're going to make the episodes of a length necessary to tell each part of the story, so some as short as this, and some longer than the usual 40 minutes?


Final Words : The series is definitely keeping me guessing, as I really didn't expect the child to show Jedi powers, and I wasn't sure whether they were going to end up stranded on the planet for multiple episodes and really following the Lone Wolf and Cub storyline, and having the Mandalorian protecting the child as he wanders the desert planet.
But they're back off into space once again, and we've got a week to wait this time before the next episode . . .