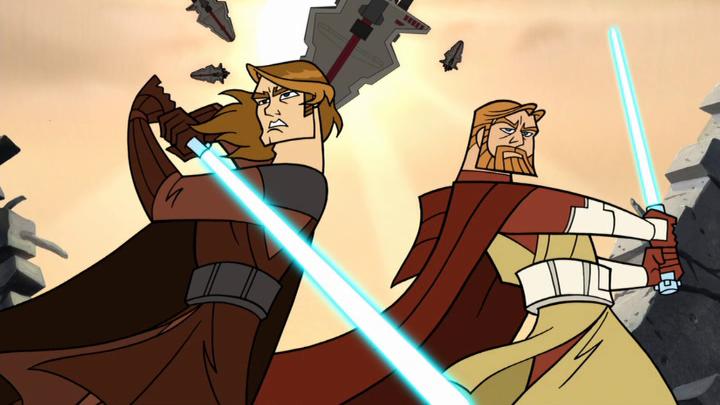 What is it ? : We begin the episode with a Separatist general contemplating with his droid subordinates how many Jedi would be required to take his fortress, since it's equipped with ray shields, etc. When the droid announces that the Jedi are attack, and instead of the hundreds the general had declared that would be needed, there are only two, Obi-Wan and Anakin who take the fortress in seconds.
We then get a montage of Anakin assisting and saving other Jedi in battles across the galaxy, before he returns to Padme, who sees the scar on his face for the first time and they spend the night together.
Back with Obi-Wan, he is trying to get a sleep in uncomfortable circumstances as rain drips through the ceiling, and Commander Cody reports in that their plan is on schedule and they'll be able to take the Separatist positions within three months. Anakin enters, and begins eating a breakfast consisting of worms and grubs, and Obi-Wan asks him where he got it, only for Anakin to tell him he got it from the Separatist camp, which he has found a way in through the sewers. Anakin and Obi-Wan breach the camp through the sewers, and take down it's shield generator, allowing the Republic forces to achieve victory.
We see two Wookiees on Kashyyyk, hunting when they encounter a hidden invasion foce, before we switch to Dooku and Grievous training with Dooku giving the cyborg general hints on how to defeat the Jedi through fear, surprise and intimidation, and admiring the additions to Grievous lightsaber collection. A hologram of Sidious enters, congratulating them and ordering Grievous on a special mission.
Anakin and Obi-Wan are contacted by Mace Windu and Chancellor Palpatine who inform them that taken systems have been retaken by the Separatists because of General Grievous, and order them to Nelvaan, where they believe that he is.
On Nelvaan, they don't detect any forces, but track an energy signature where they come under attack from a massive beast, Anakin gains the upper hand, and although Obi-Wan urges him to not kill the beast he slays it. Only to discover the tribespeople of the planet unhappy with his actions. . .

High Points : There's a load of good scenes in this episode, Obi-Wan being stuck in the rain of a drawn out battle, which was reminiscent of WW1 trench warfare. The training scene between Dooku and Grievous, which helps us understand how the cyborg became such a deadly warrior with lightsabers.
But my favourite was the montage of Anakin saving various Jedi in battles across the galaxy, it changes Anakin from just a sulky teenager into someone the Jedi could actually believe was the chosen one. I definitely think that the movies could have been improved if we'd seen more of this Anakin, so the other Jedi were more surprised and shocked when he turns to the Dark Side.
It would have enhanced the movies if there was a genuine reason why the Jedi couldn't see Anakins slide, "It couldn't be Anakin, yes he plays a little close to the rules, but he's saved my life three times!", rather than the viewer wondering how it was possible the Jedi didn't see what Anakin was going to do "It couldn't be Anakin, he's only thrown three tantrums this week and executed or disfigured two opponents!"

Low Points : But this episode is just scenes, there's no particular plot, unless the idea was to just show us the scale of the Clone Wars, and how the Jedi are rushing from place to place dealing with problems. And some of the scene's I wonder why they included them, or why in that order, the Separatist General at the beginning, wouldn't it have made more sense for him to have been the commander of the base which Obi-Wan is stuck outside of in the rain for potentially three months?
And why were we shown the scene of the Wookiees discovering their planet is being invaded? It seems totally unconnected to everything else.

And I really can't see what the problem is with Anakin killing the beast on Nelvaan, it had just stomped two groups of Clone Troopers, potentially killing them, but Obi-Wan scolds Anakin for killing it and therefore stopping it killing more Clone Troopers?

Final Words : The night we see Anakin and Padme spend together, signified by seeing their bedroom light click out, seems to hint we're seeing the twins Luke and Leia being conceived. Which personally I feel was one area of Star Wars history we didn't need to see.