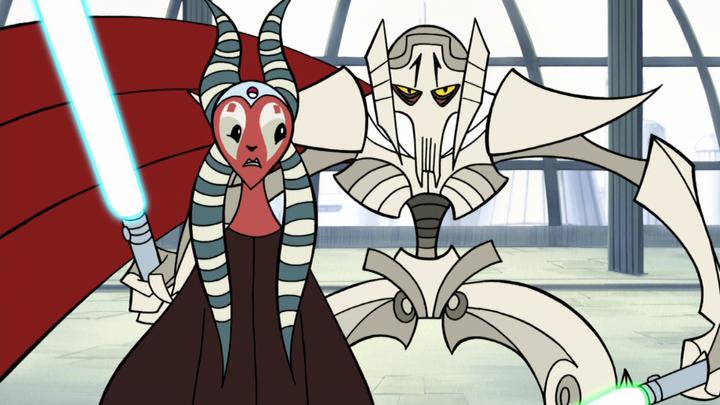 What is it ? : We pick up just as Grievous has smashed into the Chancellors chambers, Palpatine turns and scolds the cyborg that he is the Supreme Chancellor and won't be bullied, but Shaak-Ti pulls him out of the way using the force and flees leaving Clone Troopers to hold Grievous back.
Shaak-Ti, Roron Corobb, & Foul Moudama flee with Palpatine down the corridor and await the elevator to take them out of the building, as they hear sounds of brutal combat back from within Palpatine's quarters. And Grievous emerges sprinting down the corridor towards them, the last few Clone Troopers open fire, but Grievous springs to the walls to avoid their attacks, and Shaak-Ti and Foul Moudama use targeted force blasts to crush the corridor where Grievous is, but he is too agile and avoids these attacks as well, however Roron Corobb who is an Ithorian bellows with his four throats using the force to enhance the blast of sound, which crushes Grievous under the collapsing ceiling, giving them time for the elevator to arrive and for them to leave.
As the elevator rushes them down towards the street, they see Grievous sprinting down the side of the building keeping apace with them, and a Clone Trooper cuts a hole in the side of the elevator and fires a missile at the General, however when the smoke clears he is gone.
At street level they emerge and see masses of Super Battle Droids led by Grievous, so Roron Corobb once again unleashes his bellow, which blasts the Battle Droids away, but Grievous hooks into the ground with his feet claws and hunkers down, slowly taking step after step towards them even through the storm of sound and air.
The group flees once more, and Shaak-Ti calls for the Clone Troopers to call for help, but their comlinks are jammed, and ahead they see two Magnaguards awaiting them who knock the Clone Troopers to their deaths.
Meanwhile on Nelvaan, Anakin follows the prophesy, following the winds, a frozen river and entering a cave where he avoids steam vents and discovers ancient pictograms which cause him to experience a vision which tells him the story of the Ghost Hand, who is defending his people against a darkness, when he loses his hand and has it replaced by the darkness which allows him to defeat the threat, however his hand grows more powerful and out of control destroying his people and the ghost hand himself, his face becoming a mass of angles which resembles the future helmet that Anakin will wear as Darth Vader. He collapses but reawakens when he hears Amidala calling his name, and discovers a giant machine within the caves.
Back on Coruscant, the Jedi flee from the Magnaguards, leaping high from floating platform to floating platform, but the Magnaguards follow, forcing the Jedi to flee into a train station, where the speeding trains provide as much danger to the Jedi as they do cover for them to escape. However eventually the Magnaguards catch up, but Roron Corobb and Foul Moudama manage to destroy them, but the delay has allowed Grievous to catch up.
As he stands monologuing, Shaak Ti uses the force to tie the end of his cape to the back of a train, which suddenly begins moving causing Grievous to disappear along with it.
Anakin discovers an underground complex, and sneaking inside he witnesses two Techno Union discussing their project, and Anakin finds tanks containing warped and mutated Nelvaan warriors with hulking muscles. He is discovered, and the scientists unleash their subjects, and despite Anakin assuring them that he is here to help, they slowly raise their weapons . . .

High Points : An absolutely excellent episode, the continuing battle between Shaak Ti, Roron Corobb, Foul Moudama and General Grievous is amazing to behold, with such a variety of different techniques and environments used.
I think that it is enhanced because we're also dealing with 3 Jedi we've never really seen before, and we're only days before Order 66, so their deaths are imminent, and there is actual risk to the combatants, as we know that Grievous will survive and take Palpatine hostage, but we know little of the Jedi, so they could easily lose their lives at any moment.

But my absolute favourite moment of the episode is almost at the beginning, where they leave Clone Troopers holding Grievous back in Palpatine's Quarters. The sounds of the combat that they hear, includes blaster fire, light sabers, but also various power tools!
It made me laugh out loud at the randomness of the sounds, but also made me wonder what the hell was Grievous doing to the Clone Troopers, was he really using a buzzsaw to cut them into pieces?

I also loved the stylised way that Anakin's vision occured, with the cave paintings coming to life to tell the tale, and no explanatory dialogue, just telling a story of the Ghost Hand of the Nelvaan through stick figures on a cave wall.

Low Points : Once again we've got the same problem as the last episode, although both storylines are quite interesting, the cuts between the two are jarring, as the action on Coruscant has the Jedi fighting for their lives in a crucial moment of the Clone Wars, meanwhile Anakin is on a spirit quest for no particular reason.
While the stakes of Anakin's spirit quest become higher as he discovers where the male Nelvaan warriors have disappeared to (as last episode he commented on the village only having women and children in it), but it's still a fairly minor encounter, especially as we're aware that he and Obi-Wan must rush off to rescue Palpatine at any moment.

So what do you really think ? : I really enjoyed this episode, the action is great and while cutting to Anakin's story I found interrupted what was important, perhaps it was added to build tension as I was on the edge of my seat awaiting the next segment back on Coruscant.

Final Words : Well, one more episode to go before we're done with Clone Wars 2003, and although it's clear that Grievous must succeed in kidnapping Palpatine, and that Anakin and Obi-Wan must come to his rescue at the beginning of Revenge of the Sith, it remains to be seen the fates of Shaak-Ti, Roron Corobb and Foul Moudama . . .