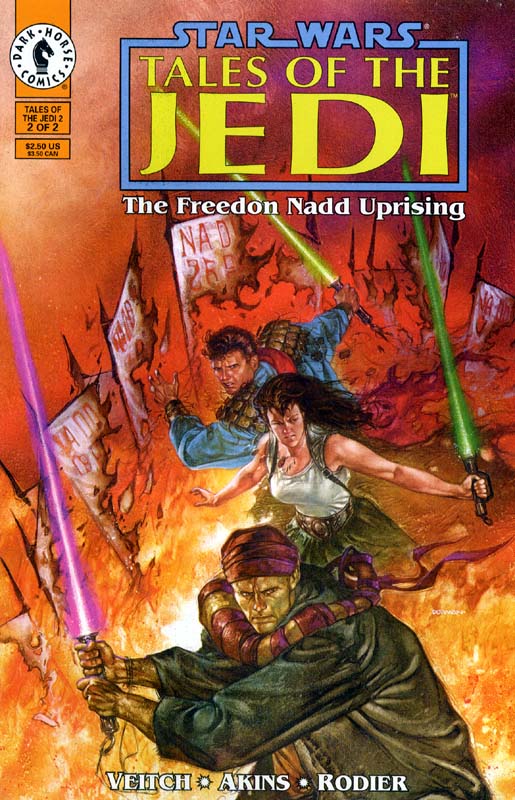 The Freedon Nadd Uprising 2: Initiates of the Sith

What is it ? : The armies of the Republic have come to Onderon at the request of Ulic Quel-Droma, and the Tetan Royals, Satal and Aleema Keto are caught up in the battle as Republic Jet Troopers assault the city of Iziz. Their ship is damaged and it crashes into the city, with the two escaping from in moments before it's fuel explodes.
The citadel of Modon Kira is being assaulted by the Naddist forces, and the Jedi from Ossus arrive to help, Nomi Sunrider, Kith Kark, Dace Diath, Qrrl Toq, and Shoaneb Culu who clear the forces allowing the Dark Side weakened Oss Wilum, Ulic and Cay Quel-Droma and Tott Doneeta to emerge as Kith Kark is killed by a blast. Nomi's battle meditation is affected by the Dark Side, and she finds herself under assault through the Force by King Ommin, but the link allows her to locate him.
Meanwhile, Satal and Aleema Keto have been showing their stolen Sith tome around in cafe's, and meet with Novar who tells them King Ommin can help them read the text within, and takes them to the King. Ommin offers them a Sith Amulet which will allow them to read the volume, in exchange for him being allowed to take a copy. He also shows them his prize specimen, the Jedi Master Arca Jeth, naked and assaulted by the Dark Side, Ommin hopes to turn Arca to the Dark Side. However Arca tells him that his Jedi have arrived, and the grouped force from the Citadel burst in.
Cay's droid arm is destroyed, and Nomi is struck down by Ommins dark powers, but Ulic cuts through the metal supporting Ommin's weakened body, and the dark sider collapses.
The spirit of Freedon Nadd guides Satal and Aleema to their Sith Tome, the Amulets and some Sith Swords, telling them to take them and flee the world alongside Republic Citizens fleeing the battle, and then the spirit distracts the Jedi by taunting them.
In the days afterwards Iziz is purged of Dark Side influences, and the remains of Freedon Nadd, Queen Amanoa and now King Ommin are taken to vaults on the moon of Dxun, where a fortress has been prepared to contain them. Ulic questions Arca about the meaning of Nadds taunts, and Arca tells him of prophecies of the return of the Dark Lords, telling the gathered Jedi to cling to the light side, as where there is light, there can be no darkness.

High Points : While a little rushed, this is a good ending to the Freedon Nadd uprising, with the Republic rallying to the Jedi to restore the legitimate government of Onderon and defeat the Dark Side.
We get a moment of tenderness between Ulic and Nomi, foreshadowing their growing closeness as the story continues, and I do adore the way that the Dark Side spirit of Freedon Nadd takes time to taunt the Jedi, simply to distract them while his new followers Satal and Aleema Keto flee with their knowledge and treasures.

Low Points : I have to question the fact that after crashing their ship and escaping it's explosion into the wartorn streets of Iziz, as Naddists, Beast Riders and Republic forces skirmish for control of the city. Satal and Aleema Keto visit "Cafes" to search for the Sith. Really!
You're telling me that during all of this conflict, the Cafe's are still open and serving? That during the war occuring just outside their doors, you can nip in and order a coffee and a space cake? What's more, it works and one of King Ommin's closest advisors just happens to be hanging around getting his order when these two royals start showing off an ancient book and asking if anyone reads Sith.
Surely just having Ommin guide them to him using the Dark Side would make some sense, as that's basically magic and can be ignored, but the Cafe's just seemed incongruous and just plain silly.

As the Jedi burst in and assault King Ommin, Cay Quel-Droma is attacked and his droid arm is severed. Now this is supposed to be a moment of drama, as Ulic sees his brother hurt once again, but just comes across as a bit of clumsiness. Making me wonder if Cay is now going to lose an arm every fight? And if he's this careless, how come he managed to make it his introduction without losing any limbs?

So what do you really think ? : A great conclusion to the Freedon Nadd uprising, leading us towards the wider conflict the two Tetan Royals will unleash on the Galaxy, and giving us a clear view that the Dark Side has plans which are only just beginning.

Final Words : So, next issue we're onto the longer parts of The Tales of the Jedi, with the 6 part Dark Lords of the Sith, and then the also 6 part The Sith Wars and finally the 5 part Redemption, meaning we're only a quarter of our way into this 4000 bby time period.