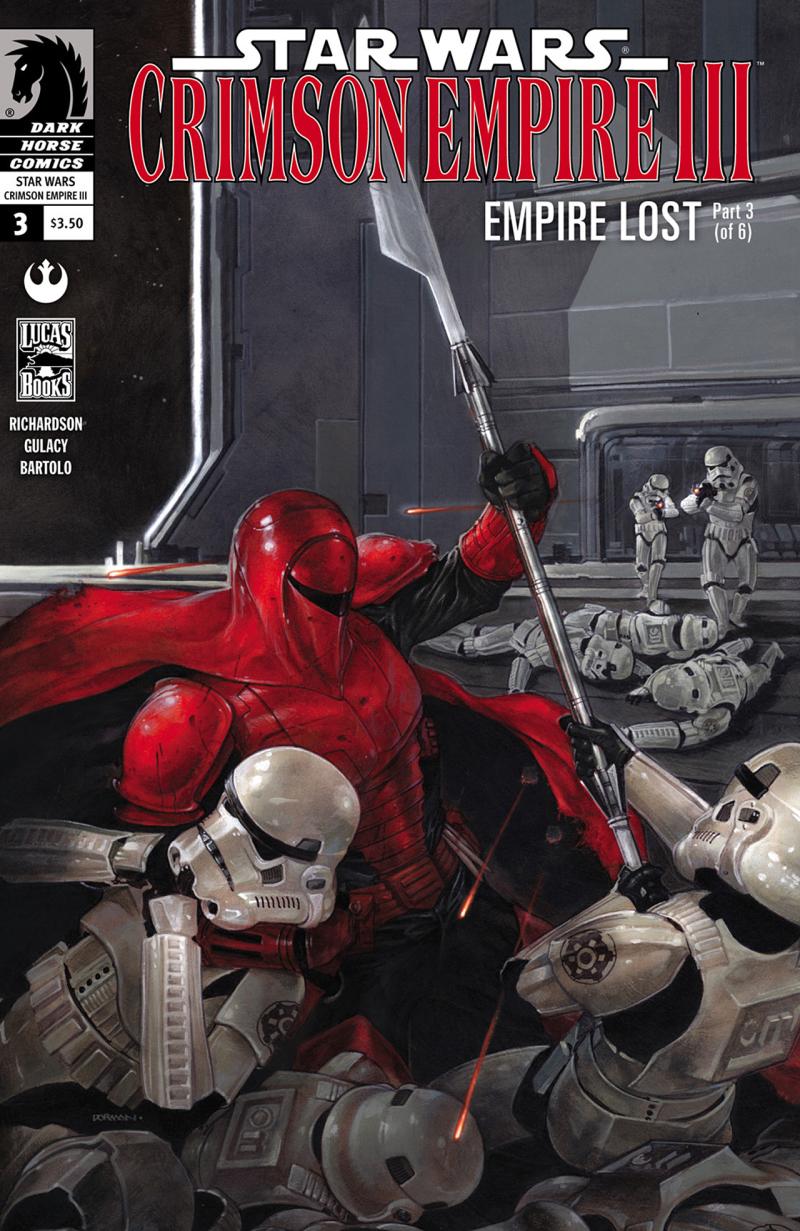 What is it ? : Han Solo is aboard a Mon Calamari Cruiser, commanding a New Republic battle against Imperial Remnant forces when he recieves a communications from his wife Princess Leia. She informs him of the attack on the family and he offers to return, but she refuses, allowing him a chance to speak with his children who he urges to look after their mother.
On RZ7-6113-23, Kir Kanos enters the meeting with the Restored Empire leadership, headed by Ennix Devian, and the two instantly clash, as Kanos remembers Devian being just a thug and isn't impressed by the way he chastises one of his officers.
Devian demonstrates his personal combat skills by challenging one of his own most skilled guards to combat with pikes and killing the man, something Kanos sees as a waste. The two then tour the base and Devian explains that rather than be destroyed, Palpatine had Clone Wars era equipment and vessels routed here and stored in case he ever needed them again, and shows Kanos a laboratory where they are working on the piece of Zinethium, which Kanos recognises as a powerful explosive which could destroy an entire city.
Devian explains that he never joined the Ruling Council as he saw them all as traitors, as he sees Admiral Pellaeon who he knows is about to negotiate a peace with the New Republic.. His plan is for his fleet to strike at the core of the Imperial Remnant, while the Zinethium is used to destroy the heart of the New Republic.
He invites Kanos to join their crusade as a symbol of their loyalty to Palpatine, but Kanos isn't impressed by Devian, remembering him as a man who enjoyed the suffering of others, something reinforced by his actions since they met. Devian is disappointed and gets his guards to escort Kanos away, realising moments later that Kanos has stolen his blaster.
On Coruscant, Mirith Sinn is interrogating one of the infiltrators who attempted to kill Leia and her children, when she is interrupted by a communication from Feena D'Asta, who offers the New Republic an opportunity for a truce with the Imperial Remnant, sending the message to Sinn due to their past relationship.
Leia and Sinn head outside to discuss, where Luke Skywalker is arriving.
Back on RZ7-6113-23, Kanos uses the stolen blaster to overload and blow open the doors keeping him locked inside his suite, and fights his way through Stormtroopers to steal an Imperial Gunboat and leave the planet, but it is all as Devian has planned even down to the ship they prepared for him, and they expect him to go to Mirith Sinn, the one person he cares about, and bring destruction to the heart of the New Republic. . . .

High Points : Things are coming together nicely, and the story isn't keeping everything a mystery like Crimson Empire II was. It's providing us with all the clues as to what's happening and letting us put their pieces together for ourselves if we want.
There's also some fantastically subtle moments in the story, such as Han's reaction to his family being in danger, and Mirith Sinn realising that now the great hero Luke Skywalker has arrived, her work is being sidelined and questioned. Something, given her problems with the Skywalkers due to Vaders murder of her husband, that is likely to drive her away from her service to the New Republic.

Low Points : But it's perhaps a little too obvious and convenient, the Zinethium stolen only last issue after Kir Kanos had arrived on RZ7-6113-23, has managed to make it's way there already. Which makes me thing the scenes with the Zinethium being stolen and passed onto Nom Anor should have appeared in issue 1 rather than issue 2.

And while it makes sense that Devian allows Kanos to keep the blaster pistol he steals, because it's all part of Devian's plan for Kanos to escape. But surely Kanos should realise that Devian would miss his own Blaster and know that Kanos has it, so would wonder why he's not being challenged on having stolen it?

And why is Kanos bothered by the way Devian treats his men and his officers? We've seen in past Crimson Empire stories that Palpatine and Vader challenged and killed one of the Guardsmen recruits to demonstrate that despite their skills they were no match for a force user. So why's he bothered by Devian treating his men in a very similar fashion?

So what do you really think ? : The story is getting moving and it feels as if things are about to happen, so there's a feeling of tension even though much of the meeting between Devian and Kanos is exposition. It feels as if we're into the story and it's making me want to know what happens next even if I'm not that impressed with how things are going.

Final Words : I'm guessing that the Zinethium is concealed aboard the ship Kanos has stolen, and that's how they intend to get this powerful explosive into the heart of the New Republic to kill Leia as Sinn is her personal security chief and they know she'll be with her and that Kanos will head straight to her to tell her of their plans.
I'm curious how Devians forces are going to be any kind of challenge to the Imperial Remnant though, as while there may be a number of ships, where's he getting the crew to operate them from, and how will a number of Clone War era ships retired due to their age and obsolescence manage to go up against cutting edge Imperial Star Destroyers and Fighters?
But as always, we shall see. . . .