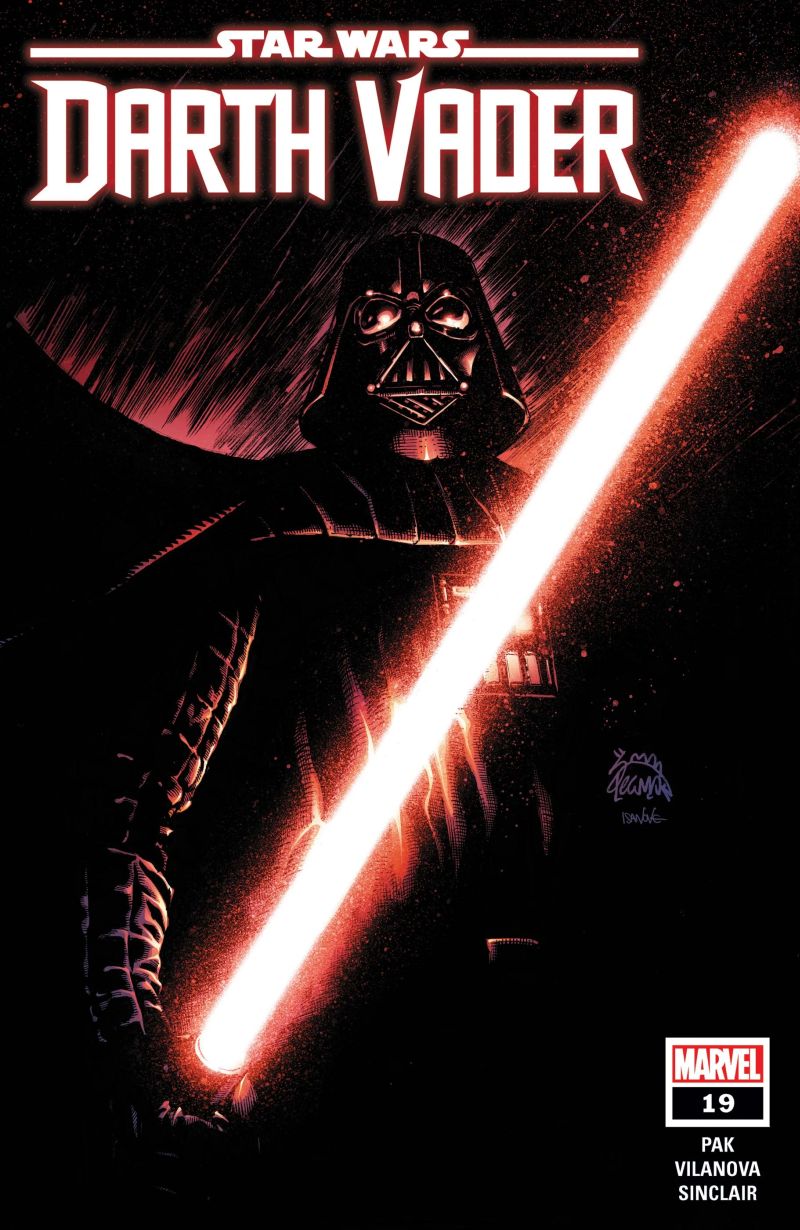 What is it ? : Vader remembers his time as Anakin with Padme and his mother, talking about the failures of the Republic and how the system doesn't work and how he would make it better if he was in charge. In the current time he is on the world of Laecor standing aside Beliert Valance looking down into a valley where a group of Stormtroopers are holding a group of prisoners.
Ochi of Bestoon approaches the Stormtroopers displaying his Imperial Seal to identify his authority and he introduces himself, Valance, the Revengers, the Assassins and Vader, asking what is going on. The Stormtroopers inform him that the locals didn't pay their tribute in time and were attacked by Crimson Dawn, which the people respond that the Stormtroopers allowed to happen pointing out a pile of corpses.
The Stormtroopers continue herding the locals, and then open fire, much to Valance's distress, but Vader leaps into the way blocking the blaster fire, and then slaughters the Stormtroopers. When questioned by the Revengers why he killed Stormtroopers when they're here to kill Crimson Dawn, he responds that they were Crimson Dawn.
Ochi checks the bodies and finds Crimson Dawn id's on them and a map to their base, while the Locals praise Vader, as he protected them with a Lightsaber, just like the Jedi heroes of old.
Following the map, Ochi comes up with a plan to bring the Crimson Dawn forces out by using part of their force as a distraction, sending the Revengers and Valance out ahead. Valances recognises that Ochi is using them as sacrificial, but the Revengers still think Vader is a hero, as he not only saved them, but the Villagers.
To draw out all of the Crimson Dawn forces, Vader uses the force to throw Ochi into danger, and then later rides the assassin droid Gee-Ninety into battle easily defeating the Crimson Dawn forces, and cutting his way into their base.
Accessing the computer systems, Vader locates a list of Crimson Dawn operatives within the Empire, and Ochi and Valance are astounded that they are in every corner of the Imperial Bureacracy, all the way to the top.
And Vader remembers Padme asking him how he would get the system to work, before commiting himself to eradicating Crimson Dawns corruption from the Empire. . . .

High Points : I'm really enjoying the way that Vader is being seen as a hero, as he strikes against the more obvious corruption of Crimson Dawn. The image of a figure striking down bad guys with a Lightsaber and protecting the weak is playing into the legends of the Jedi and the Revengers, and the villagers in this issue, are thinking that Vader is one of them.


Low Points : Again there's not much going on within this issue, there's a couple of encounters and then a revelation at the end, which very much echoes last issue. I'm also not a fan of the format for storytelling that they're using in these comics now, where we're moving from Story ark to story ark all being played across issues of the various lines, plus using each to introduce yet another comic to the product line.
So Crimson Reign, not only is told in the pages of Vader, but also Doctor Aphra, Star Wars, and the Bounty Hunters comic which was launched as part of the War of the Bounty Hunters storyline. And of course, now there's a new Crimson Reign comic line being launched by this particular storyline, and I have no want to follow a story across 5 different comics. Which means that I'm not seeing all of the story so what I am seeing seems a little fragmented, and there's loads of extra characters being added for no reason within the Vader comic, but I assume they're serving their purpose in the larger storyline.
For example, in this comic Valance seems to serve no purpose, and his actions and dialogue could easily have been spread among the many other characters. I'm also not a massive fan of Valance, he's a terminator endoskeleton cyborg who used to be a Stormtrooper, but for some reason when injured the Empire decided to rebuild as a virtually indestructible (in his original appearance he gets thrown into a volcano and climbs back out still fully functional) killing machine which looks human. As a character he doesn't make much sense, and seemingly less now he's been ripped from his Legends continuity where he fought Vader and learned to be a hero from Luke.

So what do you really think ? : There's just not enough interesting stuff going on, the format of a couple of encounters vaguely linked by the storyline, but without any other connective tissue, is weak and becoming tired very quickly, and the fact that we're not seeing the entire storyline is making it a confusing and muddled mess.

Final Words : While still extremely pretty to look at, I'm really losing interest in the Vader comic, there's some interesting ideas in here, but they're really not being well explored or fleshed out, or at least they aren't in the fifth of the storyline I'm actually seeing.