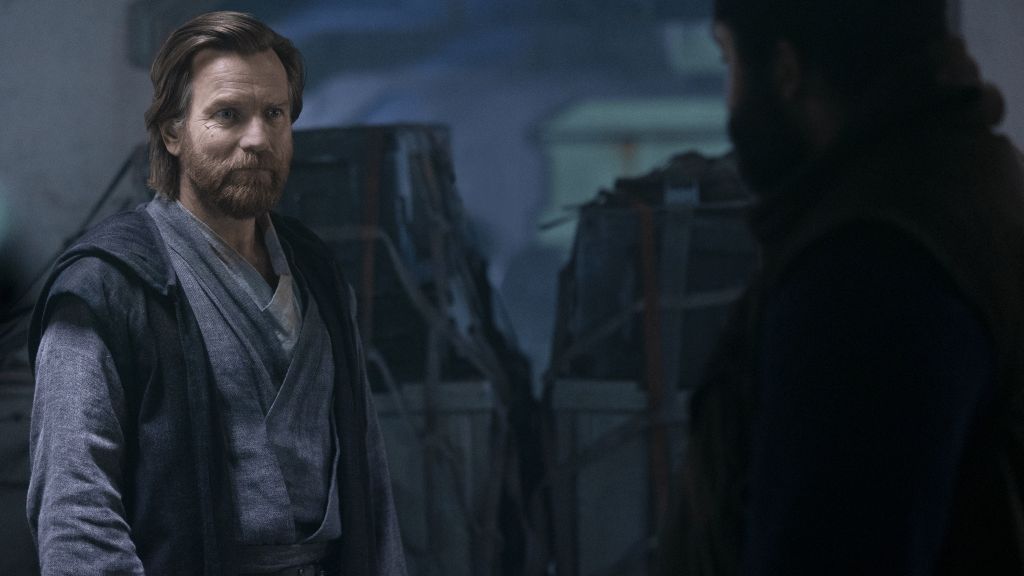 What is it ? : On Tatooine a water seller is approached by Reva, who questions him over the location of a man named Owen, shortly later Owen Lars while shopping with Luke is approached by the water seller who tells him of the woman looking for him and his boy.
Meanwhile the transport ship with the refugees, Leia and Obi-Wan is under bombardment from Darth Vaders Star Destroyer. Obi-Wan offers to lure them away, but the refugees want to stick together, and Leia reminds him that he promised to take her back to her father. He apologises, explaining that this is the best hope for everyone aboard, and he gives her Tala's holster. She questions that it is empty, but he reminds her that she is only 10 years old.
On Tatooine, Owen arrives home, and he and Beru arm themselves to defend Luke against the oncoming Inquisitor, telling Luke to hide then run if anyone comes.
Obi-Wan takes a shuttle, and as he planned the Star Destroyer follows him, leaving the refugees alone. He lands on a rocky world, and Vader takes his shuttle alone down to the surface.
The two ignite their lightsabers and clash, using not only their skill but the full power of the force to block each others blows, and Vader comments that Obi-Wan is strong once again. Vader strikes the ground causing it to collapse, and then he uses the force to hurl rocks down onto Obi-Wan crushing him underneath. Walking away believing himself victorious, we see Obi-Wan is holding the rocks away from him using the force, and he sees images of the two children he is to defend, he becomes calm thinking of the moments he has shared with Leia and the innocence of Luke, giving him the strength to free himself, and attacks Vader once more.
On Tatooine, Reva arrives at the Lars farm, and Owen and Beru try to ward her off with their blasters, but she easily overcomes them, even after Owen physically attacks her with a metal beam which she slices apart. Luke climbs out onto the surface and flees as he was told, but Reva isn't far behind.
Obi-Wan levitates a swarm of boulders and pelts Vader with them, then attacks Vaders suit, damaging the respirator system, and slashing open the helmet revealing Anakins face inside. They talk, as Vaders voice fluctuates between Anakins and Vaders, and Vader tells him that Obi-Wan did not kill Anakin, but he did himself. Obi-Wan apologises, and then leaves the wheezing and weakened Vader behind, sensing something is happening to Luke, he makes the Hyperspace jump to Tatooine.
Reva stalks Luke through the canyons of Tatooine, and dislodges him from the path he is on, knocking him unconscious. She stands over him ready to strike him dead, but sees herself when she was a child in his position, and Anakin in her position and cannot bring herself to kill the boy.
She carries him back to the Lars farm, and Obi-Wan who has now arrived gives her absolution, as she has not become what Anakin did.
In his fortress on Mustafar, Vader informs Palpatine that Obi-Wan escaped but they will cause terror across the sector to bring him out of hiding, but Palpatine questions whether Vader is agitated by feeling for his old master, but Vader assures him that his loyalty is only to his Sith Master.
On Alderaan, Leia has been reunited with the Organas, and Obi-Wan arrives to return Lola to her, he hugs her and tells her of all the features she shares with her mother, she is wise, discerning, kindhearted, and those of her father, that she is passionate, fearless, and forthright, and she asks him if she will see him again, and he tells her that if she ever needs him, she knows where he is.
Obi-Wan returns to his cave on Tatooine and clears it out, returning to the Lars farm he tells Owen that while he will be near, he'll not be too near, telling Owen that he was right, Luke just needs to be a boy. Owen asks if he'd like to meet Luke, and Obi-Wan takes the toy Skyhopper and speaks to Luke for the first time.
Heading into Beggars canyon on his Eopie, Obi-Wan sees the force ghost of Qui-Gon Jinn his old master. Obi-Wan says he wondered when he would turn up, but Qui-Gon tells him that until now he just wasn't ready, and that he still has some distance to travel . . . .

High Points : The Obi-Wan vs Vader fight is truly incredible, and while I was always hesitant about these two fighting, the spectacle itself was worth it, with the battle being somewhere between their fights in Revenge of the Sith and A New Hope. They are still youngish and powerful, but both seasoned and matched.
I absolutely adored that Obi-Wan holds his own through the fight, until he finds the peace and tranquillity of his mission, to protect the two innocent children, and his time with Leia and the bond the two have formed over these episodes becomes his focus and the source of his power as a Jedi Knight.
And while the fight between the Lars family and Reva isn't as spectacular, it is equally well done, she may very well be a powerful Inquisitor, but she is one who was stabbed through the body with a lightsaber, so expresses a weakness especially in combat. I had my reservations about Reva across the first episodes because we hadn't seen her story yet, but I am extremely pleased by the way it has turned out. She has a fantastic and complete story (in other words I don't think we really need to see her again, especially not in a spin off as has been rumoured).
And finally, Liam Neeson as Qui-Gon, it was a beautiful moment, and one that leads nicely towards the original trilogy, although it is an ending which does make me want to see more of this Obi-Wan and his time training once more under Qui-Gon.

Low Points : This wraps up the story in excellent fashion, so my only slight criticism I've mentioned above, Reva. She survives this story, which isn't really necessary, especially as it adds yet another surviving Jedi to the Galaxy. So when Luke becomes the last of the Jedi, it's really not true, because Reva, Cal Kestis, Ahsoka, Grogu, and Ezra are all still around (although plenty of time for Reva and Cal to get killed off I suppose). Jedi are cool, but there's really no reason for so many to survive. The Dark Times that Obi-Wan speaks of in A New Hope would be significantly darker if we knew Jedi were still getting hunted and killed.

So what do you really think ? : I'm really happy with the way this series turned out, and although I'm left wanting more, I do hope that this remains a limited series without any sequel.
Without me really being aware of them before, this series has managed to complete some gaps in the story between Revenge of the Sith and A New Hope, turning Obi-Wan from a broken man, into one with hope once more. Founding the relationship between him and Leia, where she is the obvious choice to contact him in the original movie rather than her father.
So while I was originally worried that this series would break continuity by adding a meeting between Vader and Obi-Wan between their two movie meetings, it actually fixed a lot of continuity that I hadn't even thought of, so I spent a fair amount of time watching this going "oh yeah, that makes sense."

Final Words : Every time Star Wars gets something this right it makes me worry, because now I'm concerned that the Andor series cannot possibly be up to this standard. But fingers crossed they get it this right.