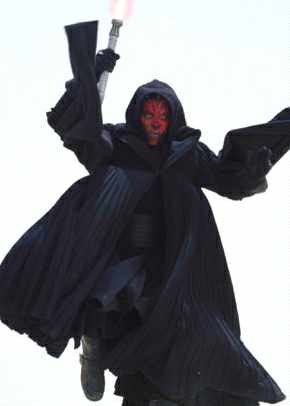 These are the known powers Darth Maul possessed and it is believed that he had access to other powers.


No one is quite sure how Darth Sidious came across his young and deadly apprentice. He was raised from an early age to be a weapon, tempered by harsh, abusive training to become an incredible warrior. Once a Zabrak from Iridonia, Maul abandoned all trace of his former identity when he took on his Sith name. So complete was his devotion that he even endured the agony of having intricate Sith tattoos applied to his entire body.

In the interests of concealing the Sith presence from the Jedi, all of Maul's missions were executed from the shadows. Though Maul longed to reveal the Sith menace to the Jedi, his devotion to his master was absolute so as not to question Sidious' timing. Maul had assassinated a number of enemies whose activities encroached on the growing Sith agenda. The dark warrior even infiltrated the heart of the galaxy's biggest criminal organization, Black Sun, killed, and escaped unscathed.

Maul had a wide array of tools to help him in his missions. His Sith Infiltrator is a modified star courier vessel equipped with a cloaking device. His Sith speeder is lean and unarmed, pared down to the bare essentials to deliver maximum speed. In the past, he has even employed a modified protocol droid as an assassin, C-3PX.

Darth Maul was a weapon forged by the hateful energies of the dark side to ensure the victory of the Sith over the Jedi order. A creature of pure evil, Maul had no personality beyond his ultimate devotion to his master, Darth Sidious. His goal was singular -- to exact vengeance upon the Jedi for the decimation of the Sith ranks.

The Republic first came to know of Maul only as a mysterious attacker. While Qui-Gon Jinn was escorting the fugitive Queen Amidala from Tatooine to Coruscant, Darth Maul swept down from above, lunging at Qui-Gon from his rocketing Sith speeder. Maul's attack was relentless; he hammered down lightsaber strikes against the accomplished Jedi Master, forcing him back time and again. It was only the timely interception of Qui-Gon by the Queen's Royal Starship that spared him.

Qui-Gon was utterly surprised and unprepared for such an attack. The Sith, everyone knew, were extinct, disappeared from the galaxy for a millennium. Yet the evidence was there -- a dark attacker, trained in the Jedi arts, brandishing a lightsaber no less.

Maul was dispatched by Darth Sidious to track down the Queen, a feat he accomplished through mysterious yet effective means. Traveling aboard his sleek Sith Infiltrator, Maul scouted the galaxy for the missing monarch, and reported his findings to his master. When Amidala returned to Naboo, Maul was there, waiting to face the Jedi once more.

As an undeniable example of his skill and devotion, Maul plunged headlong into battle against two Jedi warriors. Using his double-bladed lightsaber, Maul held off both Obi-Wan Kenobi and Qui-Gon Jinn in the heart of the Theed Royal Palace. When the Jedi became separated, Maul killed Qui-Gon with a well-placed saber strike. Kenobi, enraged, attacked Maul. This barrage was deflected by Maul who used Obi-Wan's touching of the dark side as a conduit for a Force attack; using the Force, Maul pushed Obi-Wan into a deep mining pit. Kenobi held onto an outcropping for dear life. Calming himself by calling upon the light side of the Force, Kenobi was able to surprise Maul, and cleave him in half with his saber.

A pained look of bewilderment crossed Maul's tattooed face as death overtook him. His body fell into the melting pit, splitting in two as it tumbled into oblivion.

It was only a matter of time before Sidious acquired a new apprentice.